Pantomine cast hit by covid but the show goes on... 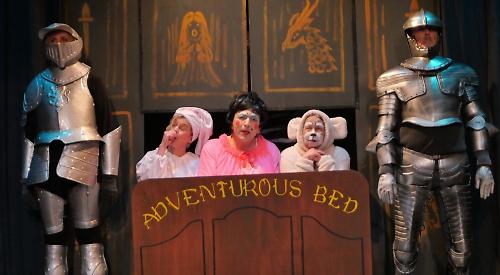 A PANTOMIME in Wargrave has been deemed a success despite being hit by covid.

The production had a smaller cast than usual and audience members were required to take a lateral flow test before attending and asked to wear a face mask.

The show was based on Arthur and the Knights of Camelot and was written by Ben Crocker and directed by Linda Daman.

Graham Howe, who played multiple roles, said: “Graham Wheal, who played the king, fell ill with covid on the Sunday morning, which was the last day.

“He couldn’t perform so his son Jake stepped in and was also young Merlin. It was his first time acting. We also had Ffion Jones, Patricia Frost and Ann Pearce joining us this year.

“Mrs Daman did an absolutely amazing job. When another cast member, who was playing a number of roles, including Teddy and the Knight, caught covid she stepped in. She did very well and the audience were brilliant too.” Mr Howe, a parish councillor who lives in Braysbrooke Road, played Sir Lovesalot, among other parts.

He said: “I liked that role because he gets a lot of attention from the ladies, which as a widower I quite liked. I was also a knight and the bishop who officiated the marriage of Arthur and Gwen.

“Then I was the speaking clock for which I had to stand on a stool and poke my face out of a cut-out.

“There were fewer people in the chorus than normal. Usually there are 10 men and women but this year we had two men and four women. We had so much fun preparing for the show and there’s no stopping us now because we are also performing The Tempest for the Wargrave Festival.”

Musical director Rodd Murray said: “We were really pleased with the outcome. Despite the rising covid cases after Christmas, the shows sold out.

“Pantomimes are hard work because the performances are high energy. We did have a couple of covid cases among our cast so unfortunately they couldn’t perform but the others stepped up. The show goes on.”

The Tempest will take place at Mill Green, Wargrave, on June 8.