All the fun of Fifties holiday camp... in February 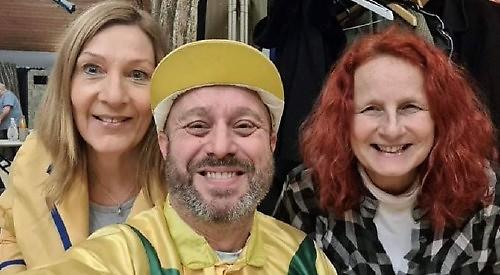 IT may be off-season, but I have been lucky enough to enjoy a break at Maplins, courtesy of HAODS’ latest production, Hi-de-Hi!

This authentic evocation of a Fifties holiday camp is a blast of sunshine on a February evening.

Well done to the design team for the retro costumes, props and glitterball glamour.

Between immersive audience experiences in the Hawaiian ballroom, we see comical scenes in the staff room, as entertainments manager Jeffrey Fairbrother (Alex Staunton) tries to win over his motley, sometimes grumpy, staff team.

Staunton is pitch-perfect as the well-meaning, well-mannered but reticent Fairbrother, trying to implement Joe Maplin’s rather vulgar ideas about entertainment.

Julie Huntington is great as lead Yellowcoat Gladys Pugh, who controls camp operations from her Maplin rostrum — when she is not making eyes at the upright, uptight Fairbrother. She oversees the team of Yellowcoats (Samantha Riley as Sylvia, Carolina Turrini as Dawn, Katie Bland as Betty, Jake Turnell-Willett as camp comedian Spike) with a rod of iron.

Gilly Meek and Matt Daniels, as dancers Yvonne and Barry Stuart-Hargreaves, bring their spiteful snobbery to the mix.

Audience “campers” are treated to a three-course dinner by “Gordon Blue” chef, Stephen Luscombe from the Golden Ball, Lower Assendon.

Dinner is offered as a “typical” Fifties menu but cooked and served with contemporary culinary flair.

We tucked into creamy cauliflower soup with Stilton crumb, textured and flavoursome with fresh thyme, tasty sausages and mash with caramelised onions and (during the interval) light and fluffy spotted dick with custard.

The farcical plot is moved along by Jenny Haywood as the dignified Mrs Bovis in pursuit of her impecunious husband, with bailiff (Jonathan Moses) in tow. When gossip is rife and reputations are at stake, on comes holidaymaker Sgt Pritchard (Glen Lambert), who intervenes on behalf of Gladys.

A Miss Yellowcoat competition and other camp entertainments pave the way for audience interaction.

The holiday camp atmosphere is perfected with suitably retro music, song and dance.

This nostalgic production may have started as a tribute to a TV comedy but the committed cast give it an energetic life of its own.

We are taken back to the “good old days” which, as the programme reminds us, were not always so good, even though we can still laugh at the seaside postcard innuendo woven into the script.

The production is a tour de force for Julie Huntington, who directs the show as well as taking the part of Gladys.

Don’t miss this tremendous, comic show, you will have a ball!