Play that uncovers truth about our relationships 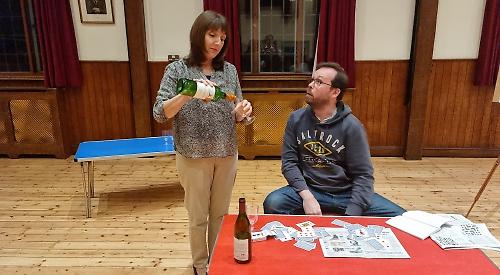 ONE of Tom Stoppard’s most autobiographical plays, The Real Thing, explores the meaning of love, the complexities of adultery and the nature of honesty.

It also takes a long, hard look at the reality under the surface of relationships, what is authentic and what is a façade.

The play was first performed in 1982 with Felicity Kendal in the West End. It transferred to Broadway, where it starred Jeremy Irons and Glenn Close, and more recently was revived there with Ewan
MacGregor.

Playwright Henry is married to actor Charlotte and actors Max and Annie are married to each other.

Annie is also an activist, fighting to free Brodie, a Scottish prisoner who burned a memorial wreath at a protest.

As relationships unravel and emotions become overwrought, the audience is invited to ponder what love is and which relationship is the real deal.

This new production by the Henley Players at the Kenton Theatre is directed by Darrel Poulos, who had a successful run with Stoppard’s Arcadia at the Kenton in 2018.

The cameo part of Brodie is played by Nathan Bristow.

Darrel is a big fan of the playwright. “He’s witty and he’s intellectual,” he says.

“His words are so good that the directing is really about just getting the characters to bring out the nuances.

“The roles require the actors to show a lot of caring and empathy and natural spark in a relationship, which is obviously very easy for Tim and Gráinne to do as a real-life couple.” There are a few twists and turns in the storyline that will keep the audience on their toes.

Darrel says: “It takes a while to actually click as to what’s going on and what Stoppard’s doing and there’s an amusing moment when the audience collectively realises that they’ve been thinking the wrong thing. It’s fun to watch the penny dropping.”

As the play is set in the Eighties, the Henley Players are recreating the era for this drama, which has meant searching for the likes of old cathode-ray televisions and cassette players.

Darrel laments the loss of the Sue Ryder sales at Nettlebed, which was a goldmine of period props.

He says: “We used to go and get costumes and furniture and say to the people, ‘Okay, we’ll pay you X for it now but we’ll bring it back and give it to you in two weeks’ and they were quite happy as they got to double dip an old sofa, say.”

Darrel is keen to recognise all the hard work going on behind the scenes thanks to volunteers.

He says: “This play involves lots of scene changes, so you need to make those really fast as you don’t want to lose your audience while you’re migrating to the next scene.

“There’s a big effort that goes on in terms of organising backstage and, of course, they’re always the unsung heroes.”

As the world opens up following the pandemic, Darrel is hopeful that people will get back into the habit of supporting their local theatre.

He says: “I look forward to trying to put another good production out there.

“It’s always pleasing for me when people come out of the theatre and say, ‘You know, that could’ve been in the West End’.

“The Kenton is a lovely old theatre. You could go there and see the show, two of you, for £35 or whatever... and it’s on our doorstep.”