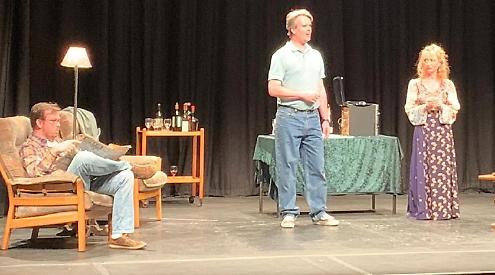 TOM STOPPARD’S The Real Thing is not the easiest of plays to follow, being a play within a play.

But once you know that, you can sit back and enjoy the laughs (of which there are many), the philosophy (of which there is plenty) and the Henley Players’
acting, which is superb.

The spine of story is essentially the character arc of the playwright, Henry (Tim Harling). He is first introduced to us as an egotistical pompous prat, telling us that without grammar we are lost. His cricket bat speech sums up his firm belief in the power of words to nudge the world along.

By the end of the play, Henry is a changed man. He has learnt of the pain of love as well as the pleasure that words are not everything after all. Only an actor of the quality of Tim Harling can show us this change in Henry.

It is often said that in The Real Thing Stoppard was examining his own love life. Here, Annie (Gráinne Harling) leaves her husband, Max, to live with Henry.

Annie does not set out to wound Henry and is incapable of seeing why he is upset by her affair. It is through his love for Annie that Henry discovers that the real thing (love) will cause him pain, a completely new emotion for him. Only actors as talented and experienced as Tim and Gráinne Harling can guide an audience through this tangled web of emotions.

A young audience will swoon over the perfectly Eighties set; those not so young will possibly delight in seeing all that old stuff back on stage. Pop music of the Eighties also plays a large part in the play.

Charlotte (Henry’s first wife), played by Donna Thomson, is such a sourpuss that you sympathise with Henry. Ioan Havard (Max) and Nathan Bristow (the uncouth soldier Brodie) both extract as much from their roles as they can while the energy of Steven Taylor-Brown (Billy) shines out.

Sigourney Lee (Debbie) gives a gem of a performance as the daughter every parent despairs of but loves regardless. It is she who pulls the first thread that leads to the unravelling of the old uptight Henry.