Mary Blandy back on trial and we’re the jury 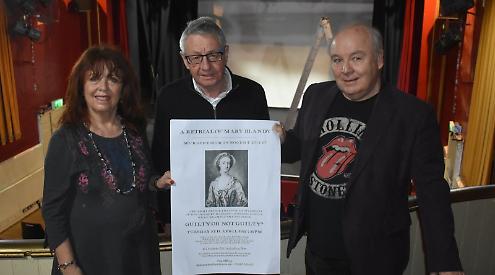 MARY BLANDY’S trial for murder was a scandal that was
followed by the whole country over three months.

Yet it took an all-male jury just five minutes to find her guilty of killing her father, Henley town clerk and solicitor Francis Blandy.

She had added a “love potion” to his tea to convince him of the worthiness of her suitor, Captain William Cranstoun.

Cranstoun had supplied the potion and, when Mr Blandy died, he fled.

After the proceedings at Oxford Crown Court, Mary was hanged for the crime of parricide at Oxford Castle on Easter Monday, April 6, 1752. She was 32.

Her body was returned to Henley and the townspeople allowed her to be buried in St Mary’s churchyard, next to her father.

According to local lore, there is barely a corner of Henley that hasn’t had a visit from Mary’s ghost and she is said to be a frequent “guest” at the Kenton Theatre, even though it wasn’t built until 1805.

Now, on the night before the 270th anniversary of her death, the theatre is to host a special one-off production where the audience will have the chance to consider the evidence and cast their vote under the laws of today — was Mary Blandy guilty or not guilty?

Could this verdict help lay Mary’s ghost to rest?

The event is based on an original idea by retired journalist and photographer Richard Reed and written by fellow retired journalist Mike Rowbottom, a writer, actor and musician. It is directed by Julie Huntington, an actor who chairs the theatre’s trustees.

Mike, who plays Cranstoun, says: “Richard presented me with 200 pages of trial transcript and related material.

“I have constructed what I hope is two evenly balanced sides of the argument, taking the evidence presented at the original trial and adding more which emerged afterwards. In the end this is a piece of theatre and I’ve written it as that — it can never be a trial and a jury would not work in the way in which we will ask the audience.”

“They had no rights whatsoever and believed what men told them,” she says. “It was an incredibly misogynistic society.”

Richard adds: “Mary would not have been able to give evidence and the jury didn’t even retire and they returned a verdict within five minutes.”

Nick Blandy, a retired solicitor and a family descendant, is in no doubt the verdict was unfair.

He says the trial would be viewed as a travesty of justice by today’s standards but at the time it would have been “pretty conventional”, including Cranstoun “conveniently doing a bunk”.

Nick adds: “Perhaps the audience needs to come and make their own minds up, free from my obviously biased opinion.”

The legend of Mary’s ghost picked up momentum in the latter half of the last century. In 1950, author Joan Morgan wrote a book called The Hanging Wood about the Blandy case and in 1969 it was performed at the Kenton.

Julie says: “That was the play where she allegedly appeared at the Kenton.

“She’s often seen in the theatre sitting in the gallery — this is what the reports are — and it’s usually period attractions that attract her.”

Julie recalls one memorable moment from a 2004 production of Daphne du Maurier’s My Cousin Rachel by the Henley Players, which she was directing.

She recalls: “Rowena
McMenamin, who was playing Rachel and is a total cynic, was on her own in the dressing room and had on a beautiful dress with a bustle at the back.

“She was checking her make-up when she felt someone pulling at her bustle and she thought, ‘Oh, I’m standing on it, what am I doing?’

“She looked round, nothing there, and then it happened again. Suddenly, the room went really icy cold and she said, ‘I’ve just met Mary, she’s sorting me out’. She felt a presence. Strangely enough, within about 15 minutes of Rowena feeling this, Mike Rowbottom came downstairs and said he’d felt a cold hand on his face.

“He says he can’t remember that but I do as I was backstage. I said, ‘Oh my god, she’s definitely here’.”

Richard adds: “She has also been seen at the Red Lion and the Rose & Crown as was.”

Mary has even been “heard” banging on the windows at the Little Angel on Remenham Lane.

Richard explains that Mary was under house arrest in Blandy House in Hart Street before she went to trial.

One day she ventured out and a crowd chased her. She ran over the bridge to the Little Angel and banged on the window before barricading herself inside.

Mike, however, is having none of it.

“I think all the talk of Mary’s ghost haunting various places around Henley is nonsense,” he says.

Henley videographer Richard Pinches has created some filmography and projector footage for the production and will play the clerk in court.

Retired barrister Vivienne Laurie is making her stage debut as the trial judge.

The play will be introduced by Debbie McGee.

All the proceeds from the show will be donated to the Chiltern Centre for disabled young adults.

Law firm Blandy & Blandy, which was founded in Reading in 1733, is sponsoring the hire of the theatre and Laurence Gordon Wilson, of Magoos bar in Hart Street, is covering the cost of the printing and equipment.

The Kenton’s technical manager Kent Davies and lighting and sound engineer Hugh Legh are providing their services free and the Kenton itself has provided the materials for the set.