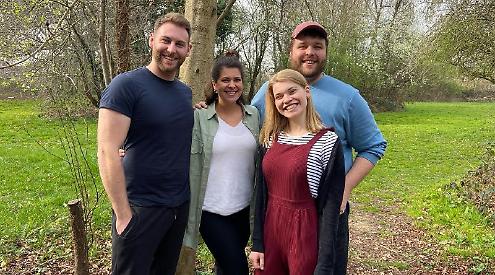 ALICE’S Adventures in Wonderland is finally coming back to Henley.

Performed at the Kenton Theatre as a “panto for Easter” in 2016, the show was due to return in April 2020 but was postponed due to the coronavirus
pandemic.

Now it is revisiting with some cast changes and some reworking of the music.

Alice will be played by actress Heather Conder while show veteran Niall Hemingway will be her father as well as the Mad Hatter and the Caterpillar. Jack Frank plays the White Rabbit, among other characters, and Eleanor Sandars is the Queen of Hearts.

The actors will be accompanied by a cast of children from the Compass Theatre in Hillingdon.

Musical director and composer Connor Jones, a member of the West End cast of Les Misérables, has rejigged the original score he wrote for the 2016 show.

Producer and director David Kemp says: “He has come back with some fresh ideas, so we’re reworking some of the arrangements.” There is a new song, Don’t Crack This Egg, to be sung by the newest member of the production, Humpty Dumpty.

“Alice meets him and he’s trying to protect himself from being broken but he ends up river dancing... it’s not quite so traditional.

“We’ve also introduced a bit more audience participation. The Queen of Hearts is a baddie and is basically trying to set up Alice and chop her head off.

“It’s a very bright production, with some projected animation, so it’s lively, with lots of colour. It’s a little bit more contemporary.”

• Alice’s Adventures in
Wonderland is at the Kenton Theatre on Friday and Saturday, April 22 and April 23 at 1pm and 4pm. The show is recommended for ages four-plus and has a running time of 110 minutes, including a 20-minute interval. Tickets cost £19 (concessions £16). For more information and to book tickets, call the box office on (01491) 525050 or visit www.kentontheatre.co.uk