Theatre offers new home to production of The Wizard of Oz 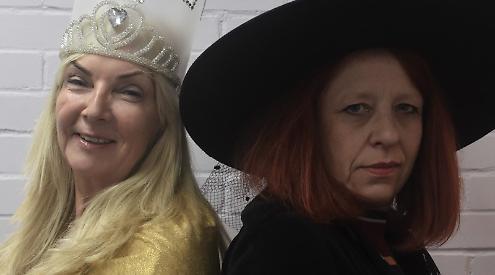 MAIDENHEAD Musical Comedy Society has been performing at the town’s Desborough Theatre since 1967.

However, following the coronavirus pandemic and the repurposing of the theatre as a covid-19 vaccination centre for the foreseeable future, the society has had to find a new home so it is now coming to the Kenton Theatre in Henley.

At the end of this month, the society will be staging The Wizard of Oz, the story of Dorothy and her dog Toto being whisked away to the magical land when a tornado rips through their home in Kansas.

The show was postponed just weeks before it was due to be performed at the Desborough in spring 2020 so the actors were grateful when the opportunity of switching to the Kenton came up.

Society secretary Emma Sanders says: “The cast were keen to do the show that they’d been waiting two years to do. They’d done all the rehearsals and the costumes were ready. We’ve had a 10-week rehearsal run, which is a lot shorter than we’d normally have, and obviously it’s a different venue for us so it’s a bit more complicated.

“If we’d have had to recast the show, we might not have done it in 10 weeks but our original tech team, choreographer, director and musical director were all available so it was all systems go.

“We don’t want to lose our usual audience but Henley’s not a million miles away from Maidenhead and hopefully we’ll gain some new people as well.”

The only new member of the production is Eleanor Duncombe, who plays Dorothy.

Dominic Belcher plays the Scarecrow/Hunk, Martin Selman is the Tin Woodman/Hickory, Trevor Begley is the Cowardly Lion/Zeke, Janice North is Aunt Em/Glinda, Louise Mappley is the Wicked Witch of the West/Miss Gulch, Scott Kitson is the Wizard/
Professor Marvel and Martin Bennett is Uncle Henry.

The child ensemble is made up of Connie Kolb, Charlotte Maxwell and Holly Maxwell while the dogs sharing the role of Toto are Phyllis and Phoebe, who belong to the choreographer Lucinda Belcher.

The show is directed by Craig Howard and the musical director is Neil Matthews.