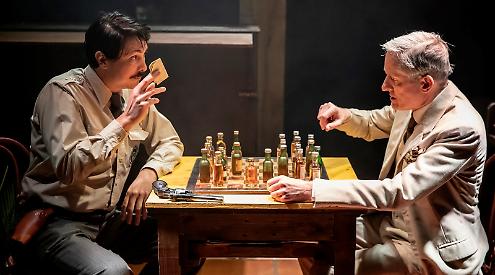 THE world premiere of a new musical
is bursting on to the stage at the Watermill in Bagnor.

Ben Morales Frost and Richard Hough have created a spectacular new musical version of Graham Greene’s iconic novel Our Man in Havana that is vibrant with the exotic atmosphere of Cuba before the 1959 revolution. (And if you don’t know your history of Fidel Castro’s rise to power in 1959 and the subsequent Cuban missile crisis, then get to the theatre in time to read the programme before the show starts, as a little background knowledge will greatly increase your enjoyment of the plot.)

The Watermill is renowned for excellent productions with great attention to detail, and this latest offering is no exception. It’s authenticity all the way, with a dominant Hispanic influence among the multi-talented cast, led by musical director Antonio Sanchez. The co-orchestrator is Eliane Correa, who is based between London and Havana, and Andrea Pelaez, the movement director, has Latin American roots, hailing originally from Colombia.

Make no mistake, the cast has a good story to tell. Englishman James Wormald (Nigel Lister) is divorced and lives in Havana with his daughter Milly (Daniella Agredo Piper). His vacuum cleaner business is not doing well and he is struggling for money when he is approached to become a spy for the British government. The money is tempting and he reluctantly agrees, but to make life easier he resorts to sending back fictitious information which is fine, until his fiction starts to become reality…

There are stellar performances among the cast, anchored by Lister’s believable Wormald, and dominated by Agredo Piper’s delightful Milly. She is rather comically pursued by the chief of police, Segura (Alvaro Flores), who has the reputation of being a torturer, and endears herself to us by being far more interested in acquiring a pet pony and loyally supporting her father, at the same time knocking out accomplished performances on the saxophone, flute, piano and bongo drums. Quite a lady!

Good solid support is given by Paula James as Beatrice, the government official who is sent out to check up on Wormald, and Adam Keast as Wormald’s friend Hasselbacher who, it turns out, has much more to him than meets the eye. Flores, James and Keast also take on other minor roles utterly convincingly and maintain instrumental support throughout.

The production is alive with well-delivered songs, and director Abigail Pickard Price delivers a good pace, maintained at times by much energetic twirling of pianos round the stage by the hard-working cast. If, as so often happens, one were asked to complete a customer satisfaction survey, this reviewer might possibly suggest pruning out a couple of the less dominant songs in each half to reduce the hour-long running time to 40 minutes each, but otherwise — 10 out of 10. An excellent evening’s entertainment.

Our Man in Havana runs at the Watermill until Saturday, May 21. For tickets and details call the box office on 01635 46044 or visit www.watermill.org.uk