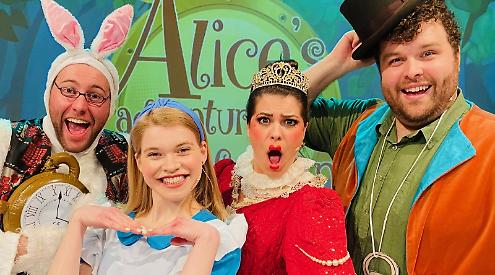 A CHEERY collection of outsized books sets the stage for this colourful show.

Alice (Heather Conder) was enchanting in her iconic blue dress, looking for adventure with a winning smile and a wonderful voice.

Jack Frank was bouncy and appealing as a whole range of funny characters, including Mr White Rabbit. Niall Hemingway perfectly captured the wild eccentricity of the story as both the caterpillar and the Mad Hatter.

There were lots of laughs arising from the expert clowning alongside a witty script jammed full of rhymes, jokes, wordplay and some delicious lines from Jabberwocky.

The daydreaming Alice falls down a rabbit hole, an illusion cleverly evoked by a scrolling backdrop. This lively, fast-paced production wonderfully embodied the madness and mischief of Wonderland.

The energetic ensemble of young dancers from Compass Theatre doubled up as such characters as the playing cards and the dormouse.

Musical direction from Connor Jones gave the audience a raft of catchy songs, including the joyful Time for Tea at the Mad Hatter’s tea party.

The opportunities for audience participation went down a storm with children and adults alike.

David Kemp’s show was an absolute fizzer of a family show. Delightful.