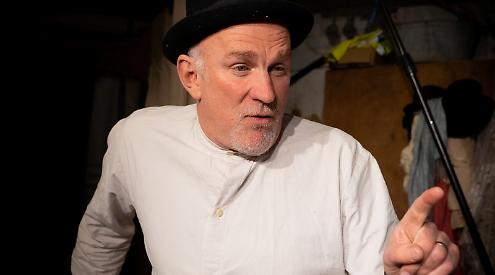 The show, which is directed and adapted by Adrian Preater, of Hotbuckle Productions, is at the Kenton Theatre in Henley tonight (Friday).

Adrian himself is one of the quartet together with Callum Anderson as Pip, Beth Organ and Jo Purslow.

He says: “It’s not necessarily what you would expect to see but you won’t be disappointed.

“It’s the same story, told in an interesting way that engages the audience because we are taking on so many characters and setting so many scenes in such a short time.

“It’s all fresh but we like to think the author would approve.”

Adrian says the set changes resemble the “ballet of the boxes”, adding: “We do it with three boxes, which we move around to create the different scenes and settings.”

He and Beth have also composed some original music for the play, some of which will be played live.

Dickens’s 1861 novel follows Pip, an orphan, from the marshes of Kent to well-heeled areas in London. It’s a coming-of-age story with many lessons in morality.

Pip falls for the cool and aloof Estella, who is being raised by Miss Havisham, a lady who has never recovered from being jilted at the altar.

After he finds himself bestowed with “great expectations”, receiving a great fortune from a mysterious benefactor, Pip encounters a rogues’ gallery of people from all different backgrounds with varying levels of integrity and learns valuable lessons about life.

Adrian says: “He’s a poor boy who plays at the rich house and dreams of marrying the very beautiful but cold girl Estella.

“Then suddenly he comes into money and he becomes snobbish and pretentious.”

He says the play is a study in the difference between the imperious upper classes and “people who are impoverished, humble and full of humility”.

Pip’s brother-in-law Joe is a blacksmith and Pip is ashamed to be seen with him in high society but later realises that in fact he is a true gentleman.

The story was first published in serial form, beginning in December 1860, which meant that it required a serious amount of exposition. Adrian says: “Like all the books of that Victorian period, it’s quite heavy reading because there was so much information to impart.

“Novels these days are quite light because we all understand and know society and what goes on, or at least we think we do.

“Dickens was having to describe everything and it’s a social commentary as well as a story.

“We do what I consider to be justice to the story but we do it in an interesting and innovative way.”

• Great Expectations is at the Kenton Theatre tonight, beginning at 7.30pm. Tickets cost £21 (concessions £19) with a special offer for school groups. The show has a running time of 155 minutes, including a 20-minute interval. For more information and to book tickets, call the box office on (01491) 525050 or visit www.kentontheatre.co.uk