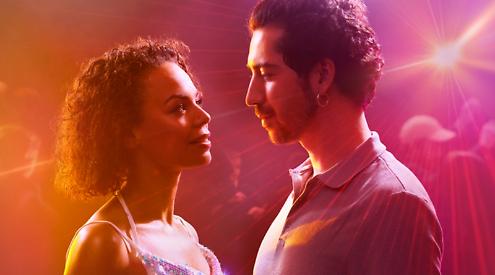 LET us assume that Jane Austen is dancing rather than turning in her grave because Persuasion is a pulsating modern take on her Regency romcom.

The programme proudly proclaims there’s not a bonnet in sight and in one scene in the first act there’s very little clothing at all as the characters get down to a foam party while modern chart music booms from the speakers.

Who knew Lyme Regis could be so debauched?

This show is mannered, but genteel it is certainly not.

Adaptor and director Jeff James has taken the text, stripped out the false modesty and elaborate ritual and replaced it with dynamic modern speak and emotions. What endures is what’s important: the quest for love and security and the recognition of paths wrongly taken.

All that sounds terribly earnest but that would be to misrepresent it because it never fails to engage and laughs are regular and frequent — as you might expect from Austen’s wit.

On this occasion it’s Jeff James’s wit from Austen’s ideas but you get the message.

There’s a nod or two to modern references — a joke about a party being a “gathering” and a brief comment on Bridgerton, which is the Austen industry eating itself really.

And a complete departure from the book sees a lesbian relationship slowly develop but never quite reaching conclusion, at least not within the confines of this play.

The attention is held consistently with just a blue curtain as a background and an oblong revolve as the stage.

There is no furniture, no props and no set dressing so the actors have to work flat out — and they do.

This isn’t just Austen in modern dress, it’s a complete makeover and a joyous one.