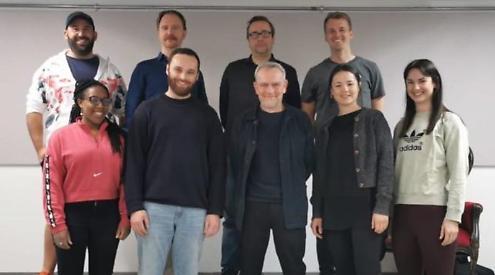 A NEW stage adaptation of a hit Radio 4 series sends up the works of Charles Dickens while still respecting his campaigning for social justice.

Bleak Expectations is taken from the 2007 comedy written by Mark Evans and is directed by Watermill veteran Caroline Leslie, whose previous credits include Trial by Laughter, The Wipers Times, Thoroughly Modern Millie and Radio Times.

The radio series featured names such as Tom Allen and Anthony Head, with cameos from Celia Imrie, David Mitchell and Martha Howe-Douglas of TV’s Ghosts.

In the story, Sir Philip Bin, inventor of the rubbish bin and known as Pip in his younger days, looks back on his life and times in Dickensian London and his adventures with his sisters, Pippa and Poppy, and best friend Harry Biscuit.

Half-orphan Pip has to escape the clutches of Mr Gently Benevolent, get past the Hardthrasher siblings and avoid a disastrous fate.

Dom Hodson, who plays Pip in the new production, says: “There’s a lot of fun to be had with those names.”

The children’s father, whom they call “Papa”, returns from his travels bearing gifts for his offspring.

Dom says: “Pip, Pippa and Poppy are given a pipe, a puppy and an anvil. Anywhere Pippa goes, she takes her beloved anvil because it reminds her of her father.”

He says that early on in Pip’s life, things take a turn for the worse: “His father dies, his mother goes insane — she thinks that she is a piece of linen — then he gets sent off to a boarding school called St Bastard’s, the cruellest school in the UK, where every boy is killed on his 18th birthday.”

In searching for true love, Pip tries to find happiness with a woman called Flora Dies-Early before going on to meet Ripely Fecund who, at 28, is “far past marrying age”.

Dom says the show will appeal to both Dickensian scholars and comedy fans.

“Audiences don’t need to have any Dickens knowledge at all — it’s just lovingly taking the Michael out of Victorian England,” he says.

“It’s poking fun at that era and recognising how ridiculous some things were at the time, like women’s rights effectively being non-existent. There’s a line where I think it says, ‘She’s a woman and therefore doesn’t legally exist’.”

Rehearsals are going well. “We’re having a very silly time,” says Dom. “I don’t think I’ve been in a rehearsal room where there’s been quite so much laughter.

“The difference to the radio show is that there’s an extra element of comedy with the visuals. Obviously radio relies heavily on sound effects, whereas we’re doing things in the flesh. It brings another level of ridiculousness to it.”

Dom says that the story remains true to the heart of Dickens, while creating a fond parody.

He explains: “It is slapstick but we very much believe in the characters. It’s not about sending it up, we fully believe in it and this is our truth, but it just happens to be that the things we are saying and doing are just bonkers.

“So, Mr Gently Benevolent is actually a complete git and Mr Parsimonious is actually incredibly generous and lovely.”

Dom will be joined by Rose Basista as Pippa and Caitlin Scott as Poppy in addition to Colm Gleeson, J.J. Henry, Simon Kane, Alicia McKenzie, Nicholas Murchie and Dan Tetsell.

Some members of the cast are doubling up and Dan has an extra challenge, playing the four siblings of the Hardthrasher family.

Dom laughs: “He plays the headmaster, the vicar, a governess and the judge. Chastity Hardthrasher is the sister and Dan is not particularly well disguised playing Chastity, so it’s quite fun — he’s getting used to his rehearsal skirt.