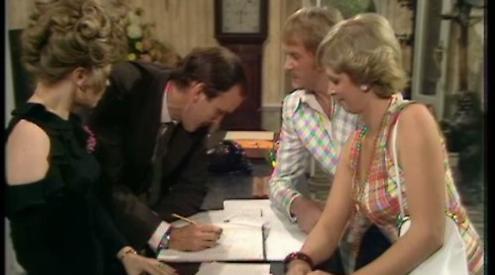 LAUGHTER is said to be the best medicine so here’s your chance for a blast of funny stuff to make you feel better.

Between them, they have appeared in Hi-de-Hi!, You Rang, M’Lord?, Dad’s Army, ’Allo ’Allo!, The Muppet Show, Fawlty Towers, Yes Minister!, Morecambe & Wise, The Two Ronnies, The Navy Lark, Frankie Howerd’s Please Yourselves, Rising Damp, The Likely Lads, Get Some In and On The Up, to name just some.

They will be telling anecdotes in a nostalgic look back at the sitcoms of yesteryear on stage at the Kenton Theatre.

There will be classic clips and Keith will play a quiz along the lines of Name That Tune, to help those memories come flooding back.

April says: “Comedy is the important thing in life — everybody needs to laugh, especially these days with Ukraine happening and the economy and the rest of it. It’s a great feeling when you actually make people laugh.”

In the 1975 episode of Fawlty Towers, entitled The Wedding Party, she played one half of a young, unmarried couple, Jean and Alan (Trevor Adams), who put the wind up neurotic hotel manager Basil Fawlty John Cleese) when they try to book a double room. They are rescued when Basil’s wife Sybil (Prunella Scales) gets involved.

April says that Cleese’s performance became more manic as filming progressed. “It was hysterical and trying to keep a straight face was very difficult but it was enormous fun,” she says.

“John was a perfectionist and when we went into the studio he said, ‘Now, listen, we’re not going to make any mistakes because we’ve had a week’s rehearsal. Now the tech boys’ — and it was only boys in those days — ‘have had no rehearsal so they are allowed to make mistakes but we are not.’

“We thought, ‘Whoa, oh dear’ but, luckily, John was the first person to make a mistake so we laughed like drains.”

The trick, explains April, is to get the audience to play along, as she witnessed with Ronnie Corbett on the set of The Two Ronnies.

She says: “Ronnie was spontaneously funny because he was a stand-up comedian who’d done nightclub shows. He was wonderful at chatting to the audience and would say to them, ‘Look, we’re going to have to do that all over again and I know you’ve seen it but we want you to laugh even more this time’. Of course, the audience, who were in on the secret, rose to the occasion.”

April says that Ronnie Barker’s memorial service at Westminster Abbey had a moment of pure comedy gold when it referenced one of the pair’s great sketches.

She says: “I couldn’t understand the laughter starting from the west door and it went on and on. Then I noticed that among the whole choir, all coming in procession, were four choirboys at the corners, each carrying the most monumentally large candles. The whole congregation roared with laughter.”

April also had a role in The Pink Panther Strikes Again, starring Peter Sellers as the inept, clueless Inspector Clouseau but who was a gentleman to her.

She recalls: “It was the very first day of shooting and Peter Sellers was sitting in his canvas-backed chair, with ‘Peter Sellers’ on the back. There was a chair next to it saying ‘Artiste’. I said, ‘Good morning, Mr Sellers, my name’s April Walker and I can’t tell you how nervous I am because I admire you so much’. And he said, ‘My dear, come and sit down, I’m always nervous on the first day of picture. We’ll sit here and shake together’.

“A few days later, we saw the rushes and I had one close-up. He turned to me and said, ‘That was absolutely right, April’.”

Sue says: “The French came out as randy, the Germans as kinky, even the Italians got a bashing with Captain Bertorelli saying ‘What a mistake-a to make-a’. The English just came out as twits, didn’t they?”

The sitcom remained family-friendly with memorable phrases such as “Listen very carefully, I shall say this only once”, “Good moaning, I was just pissing by the door when I heard two shats” and “That dress is setting off my dicky ticker”.

Sue says: “Okay, we had a bit of double entendre and it was tongue in cheek but nothing nasty and no foul language. It was something you could watch as a family.”

Of the Kenton show, she says: “There’s going to be music, singing, frolics, fun and laughter. There will be a question-and-answer session with no holds barred. There will even be an ’Allo ’Allo! can-can. After the last couple of years with the pandemic, and with all this awful Ukraine war and everything that’s going on, the country needs to have a little bit of a laugh. It’s time for a bit of escapism, a bit of entertainment.”