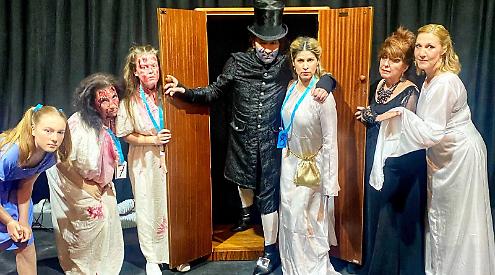 Now playwright Piers Burnell has gone into even darker territory with a retelling of French author Charles Perrault’s 1697 story of Bluebeard, or La Barbe Bleue.

The play, The Devil and The Dove, was entered in the Henley Drama Festival and performed by Henley Amateur Operatic and Dramatic Society and won three prizes and a nomination.

“Charles Perrault is considered largely responsible for laying the foundations of the fairy-tale genre and his tales have dark, gruesome themes.”

Serial wife-killer Bluebeard offers his young wife a key to a cupboard but forbids her from using it but the tables are turned when she makes a horrendous discovery about her predecessors.

Piers says it’s about human curiosity, explaining: “A lot of people, without knowing of Bluebeard, have heard of the cautionary tale, so it has always been in people’s psyche — ‘I’ll give you a key, but whatever you do, don’t go into that cupboard’.”

In a twist on the original, it is not the men who save the day.

Piers says: “It’s the wives who kill Bluebeard and the mother and the sister watch. I just found that dynamic much more interesting than the usual thing where the women do all the hard work and then it’s the men who come in and take the glory.”

His 12-year-old daughter Vivienne, who is a member of StageWorks, was the narrator. Piers says: “This was the first show we’ve done together and she absolutely loved it.

“There were two older ladies in the front row who pretty much jumped out of their seats when I shouted and interrupted and my daughter only just stopped herself from laughing.

“I had three dead wives rushing out of a specially adapted cupboard and they were holding them back with ropes, then pulling them back in.

“Then there was a picnic scene that was in slow motion with someone humming Summertime and it was visually good fun. They spin plates and cutlery really slowly, while the cutlery is actually drumsticks and a bottle is actually a trumpet.”

The scene won the award for the “magic moment” of the festival. Piers got the cast to use non-naturalistic acting. He says: “I wanted it to be stylised. At first, they were like, ‘What do you want us to do? What does this mean?’ so I said, ‘Just trust me — you’ve got to be really slow, everything has to be delicate, it will work’.”

The play had a cast of eight with Piers as Bluebeard and Vivienne Higton-Burnell as the narrator, Katie Bland as Dead Wife 1, Sarai Denny as Dead Wife 4, Laura Neighbour as Dead Wife 7, Julie Huntington as the mother, Sam Riley as the sister and Melle Flint as the younger sister/wife.

The horror make-up effects were specially crafted by Marnie Spiers.

HAODS is taking the play to Abingdon Festival in June and it is provisionally booked for a double bill alongside a Henley Players’ production at the HAODS Studio in October.