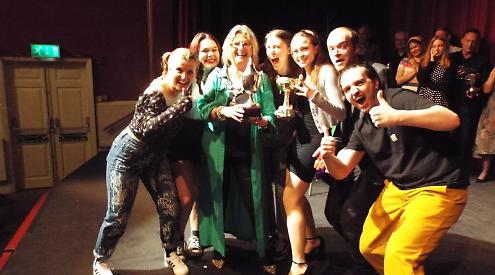 PLAYWRIGHT and actor Piers Burnell said he was “totally chuffed” to take three prizes at the 50th Henley Drama Festival.

Twelve plays were entered in the festival, which was held at the Kenton Theatre from May 3 to 6.

The event ended with a gala night and awards presentation, which was the last official engagement for outgoing mayor Sarah Miller.

Mr Burnell was part of the creative team behind The Devil and The Dove, which was performed by the Henley Amateur Operatic and Dramatic Society.

He wrote the play, which was a retelling of French author Charles Perrault’s 1697 story of Bluebeard, or La Barbe Bleue, and played the lead role. The piece was runner-up in the best play category and won both best presentation and “magic moment” of the festival for a picnic scene where the actors passed a record round and improvised Summertime in slow motion.

In addition, Melle Flint was nominated for best supporting actress.

Mr Burnell, who lives in Henley, said: “I’m incredibly grateful for the runner-up award, which is fantastic considering it’s an original piece of writing.

“I’m very happy for my cast as it reflects the hard work they put in. I’m thrilled to bits about best presentation because that is about the whole look of it. It was a very visual piece with a decapitated head and ropes and slow spinning plates. That, along with the magic moment meant the adjudicator totally got where I was coming from.”

He bowed each time he went to receive an award. “It was a joke and Sarah took it well,” he said. “I know her so it was lovely that she was doing the awards.”

Festival director Ann Dayton said the standard of entries was the best in years. “We didn’t have one duff play that you sat and winced at,” she said.

The adjudicator was Jill Richardson, a well-known local drama expert.

Mrs Dayton said: “She knows her stuff, it was incredible to watch her and the way she handled it.”

Class I, open category for best play — Limitless Academy for Performing Arts for Teechers. Runner-up — Henley Amateur Operatic and Dramatic Society for The Devil and The Dove.

Best presentation — Henley Amateur Operatic and Dramatic Society for The Devil and The Dove.

Best actor — jointly awarded to Tim Ponsford and Peter Burton, for the Bishopstoke Players’ Out of the Flying Pan.

Class III, best performance — the cast of the Limitless Academy of Performing Arts for Teechers.

Adjudicator’s choice — Bishopstoke Players for Out of the Flying Pan.

“Magic moment” — Henley Amateur Operatic and Dramatic Society for The Devil and The Dove.