Nell’s a right royal triumph: a fine production of a fine play 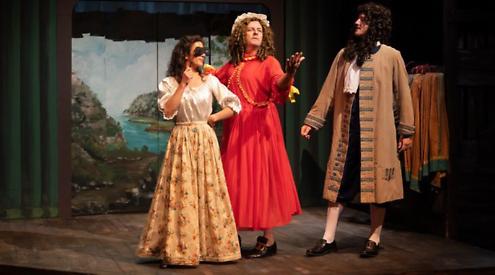 WITH a string of forthright, likeable characters, Jessica Swale’s Nell Gwynn is comical and engaging from the outset.

Inspired direction from Julie Utley and Caroline Malnick, together with Nick Morley’s
co-ordination of a large production crew, make this a wonderfully enjoyable show of a very high standard.

Beaumont is witty and assertive as a young woman from the wrong side of the tracks holding her own on stage and in the royal court.

Drew Morris is suitably regal as Charles II but he also manages to show the human side of the king.

Rebecca Cleverley is impressive as Lady Castlemaine, the king’s erstwhile mistress, outmanoeuvred only by the indignant Queen Catherine (Barbara Wood), who is fiercely antagonistic to her rival.

Teri Stevens is chilling as the scheming Lord Arlington. The arrival of Louise de Keroualle (a very funny Hannah Smithson) introduces another contender for the king’s affection.

Nell takes her place at the heart of the theatre company under the hapless leadership of Thomas Killigrew (Tom Mackriell), coached and supported by the charming Charles Hart (Jack Prince).

John Cornelius is convincing as the troubled Dryden, searching for solutions but not finding them.

Sue Huntingford-Ledger, as musical director, oversees some accomplished song and dance (choreographed by Caroline Malnick), which lends a celebratory tone to the show, especially in the final medley of songs.

A sense of the period is evoked by the glorious costumes.

Swale’s cleverly crafted script is a drama about drama, a reflection on theatre itself, with acknowledgement of the role of Charles II in reviving theatre after the Protectorate.

Hart’s acting lesson for Nell is hilarious, as is Nancy’s reluctant attempt to take to the stage in Nell’s absence.

The song Three Weeks to Go stresses how much work is needed to make a production succeed.

This is a fine production of a fine play, at times raucous and saucy, but perfectly pitched and paced throughout. It’s a right royal triumph.

Three cheers for feisty Nell, who refuses to be a plaything, even for a king.