Shakespeare as he would have seen it 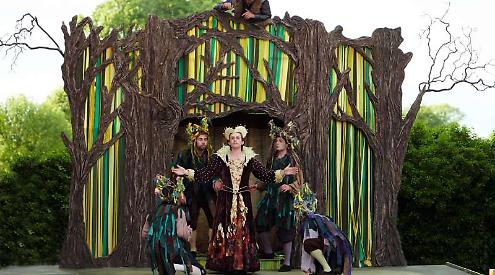 SHAKESPEARE’S As You Like It will be presented at Stonor Park next week in just the way the playwright originally saw it.

An all-male cast of seven from The Lord Chamberlain’s Men will play all 22 characters in this outdoor production.

In the story, Rosalind, the daughter of the exiled Duke Senior, who has been usurped by his brother, Duke Frederick, is in the Forest of Arden with her cousin Celia.

She meets and falls in love with the brave Orlando. When Rosalind is banished by Frederick from seeing Orlando, she dresses as a boy in order to cure him of his love for her.

In the meantime, her cousin Celia is disguised as a shepherdess, Aliena. Amid several other tangled love affairs, confusion reigns as identities and genders are hidden and swapped in a search for true love and happiness.

“We present them all as Shakespeare first saw them, all male, in the open air and with Elizabethan costume, music and dance.

“Using this practice that was in place 400 years ago brings a freshness and clarity to the productions that is not always found elsewhere.

“There is an extra slice of fun with this particular production being presented as all male.

“In the play, Rosalind disguises herself as the male shepherd Ganymede and subsequently pretends to be Rosalind in order to woo her love Orlando.

“In our production, there is an extra layer as that girl disguised as a boy pretending to be a girl is being played by a boy!

“We regularly get audiences telling us how surprised they are when only seven actors come on for the curtain call at the end. Hopefully, that means we are doing something right.

“We spend a lot of time in rehearsal working to very clearly define each character, which not only makes the storytelling clearer, it also makes it easier for the actor.”

• The Lord Chamberlain’s Men present As You Like It at Stonor Park on Thursday at 7pm (doors open 6pm). Tickets cost £17 adults, £10 children, booking fees apply. For more information and to buy tickets, call the box office on 0333 666 3366, email
boxoffice@tclm.co.uk or visit www.tlcm.co.uk/events/141/
stonor-park