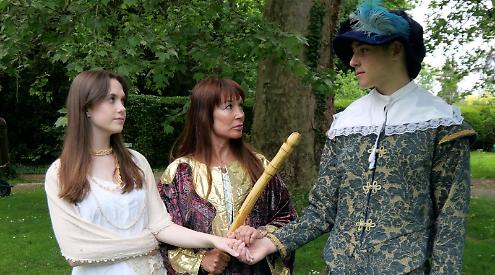 THE characters of Prospero and Caliban have been changed to female in Wargrave Theatre Workshop’s forthcoming production of Shakespeare’s The Tempest.

The outdoor show will herald the start of this year’s Wargrave Festival on Wednesday, which has a theme of “summer of love”.

Producer Joy Haynes says: “Helen Mirren took the part of Prospera in a film a few years ago and that’s partly what inspired us but we’ve also got a lot of talented females who traditionally have not had much in the way of parts in Shakespeare because most of the parts are male.

“We’ve had to do a bit of changing of the script obviously because she’s referred to as a male father.”

Set on an island near Italy, The Tempest tells the story of a rift between the rulers of Milan and Naples.

Prospero, the rightful Duke of Milan — here the Duchess Prospera, played by Grace Tye — has been usurped by her brother Antonio and Alonso, the King of Naples.

She lives in exile on an island with her daughter, Miranda (Erin Bowe), the spirit Ariel (Emma-Jane Hughes) and a wildman (woman) called Caliban (Chris Christie).

Prospera raises a storm to shipwreck a boat containing her enemies, who wash up on the island. Miranda meets and falls in love with the king’s son, Ferdinand (Freddie Meader), while the castaways, including drunken butler Stephano (Mike Watt) and jester Trinculo (John Turner), conspire against Prospera until Ariel confuses them.

Joy explains: “It has got everything. There’s murder plotted, there’s romance between Ferdinand and Miranda and then there’s the comedy with the drunken butler and
Trinculo.”

Emma-Jane had a principal role in Wargrave Theatre Workshop’s Christmas pantomime but the group has welcomed two newcomers in 16-year-olds Erin Bowe and Freddie Meader. Joy and her husband, Joe, who is co-directing the play with Peter Hughes, have been involved since the beginning.

She says: “The first one we did was A Midsummer Night’s Dream in 1987 and we have been doing a Shakespeare production at every Wargrave Festival since. We have a lovely setting on Mill Green in front of the church and we have tiered seating for the audience, which is covered, but the actors are out in the open, so fingers crossed.”

The group, including Joy and Joe, performed The Tempest at the festival in 2001.

Joy says: “We have got one or two of the people who were in that production who are in this one too.

“Grace is an extremely good actress while Chris Christie is excellent as a female Caliban.”

• The Tempest by Wargrave Theatre Workshop is at Mill Green, Wargrave, RG10 8EU from Wednesday, June 8 to Saturday, June 11 at 8pm. Tickets cost £16 to £18 adults, £10 students and those aged 18 and under. For more information and to book tickets, visit www.ticketsource.co.uk/
whats-on/wargrave/
wargrave-mill-green-open-air/the-tempest-by-william-shakespeare/e-byrljx or
wargravetheatre.co.uk