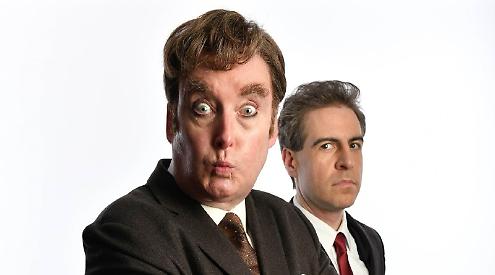 A SHOW based on the life of Frankie Howerd comes to Henley next week.

A star of stage, screen and stand-up from the Forties to the Eighties, Howerd was best known for TV’s Up Pompeii!, a comedy set in the ancient city before it was buried in an eruption of Mount Vesuvius.

He played slave Lurcio and was famed for his hangdog expression as he shared neuroses directly to the camera and added plenty of innuendo such as “Titter ye not”.

Howerd’s End was written by actor and playwright Mark Farrelly, who was drawn to the comedian’s biography, which revealed his great secret.

For more than 30 years, Howerd had shared his life with his soulmate, Dennis Heymer, but had carefully kept their relationship out of the public eye.

Mark says: “It was a great surprise to me, not because it was a male partner but because nobody ever knew about this person. The two of them had met in the late Fifties and they were together until Frankie died.”

Howerd first met Heymer, a wine waiter, in the Dorchester Hotel in London in 1958, when homosexuality was still a criminal offence.

It wasn’t until the Sexual Offences Act in 1967 that it was decriminalised under UK law.

Mark adds: “So, for the first nine years they were together, it was illegal for them.

“I understand Frankie being concerned about his career and prejudice at that time but he chose to keep it a secret right until the end.” He and actor Simon Cartwright, who plays Howerd in the show, talked to the late Barry Cryer about the comic, who was a friend.

Mark, who plays Heymer, says: “I really picked his brains about Frankie and he used a phrase which I put in the play — that they were ‘hunted men’. None of us alive today can conceptualise emotionally what that must have felt like.”

The two men created ingenious ways to stay together.

Mark says: “Dennis would accompany Frankie to gigs as the lighting designer, or as his manager, or as his chauffeur.

“When Frankie was on This is Your Life in the Seventies, Dennis was there but had on these horn-rimmed glasses, which he didn’t normally wear.

“Apparently, the explanation was that Frankie was so paranoid about being discovered that he wanted to make sure that Dennis looked as unattractive as possible.

“As you can tell from his stage act, Frankie was not terribly comfortable in his own skin.

“Like a lot of comedians, he made a virtue of it and accentuated all that jitteriness and discomfort and awkwardness, going on stage and telling the audience that the material he was about to deliver was rubbish, saying, ‘I feel sorry for you because I’ve read it’.

“But there’s a harder truth here that if you are that uncomfortable with yourself, then you’re probably not going to be terribly good at relationships because at some level, you don’t love yourself.

“He was a knot of neuroses and insecurities and Dennis was much more at ease with himself and life in general.”

Howerd and Heymer shared a house in Somerset called Wavering Down until Howerd’s death in 1992, aged 75. Heymer continued to live there until his death in 2009.

The opening scene of the play is set in the house, with Heymer reflecting on his life with Howerd.

Mark says: “There was a huge portrait of Frankie over the fireplace, which is replicated on stage in our set.

“Dennis kept the house exactly as it had always been and he eventually opened it to the public. You could literally just amble around their house while Dennis was still living in it.

“The house is owned by new people now but they have kept a huge amount of things as they were, so it’s remarkable. It has the air of a museum.”

After Howerd’s death, his friends and family held a wake at the house and then discovered Heymer was missing.

Mark says: “People got worried and went looking for him. They found him at the graveyard, which was a 20-minute walk away, weeping. He was obviously heartbroken.”

The playwright admits it was difficult to find the actor to play Howerd until Cartwright auditioned.

“The remit was to find somebody who could convincingly play Frankie, not only when he’s on stage but also what he was like off,” he says.

“It’s amazing when you audition people to do Frankie how quickly they turn into Kenneth Williams. It was worth several years’ wait to find Simon.”