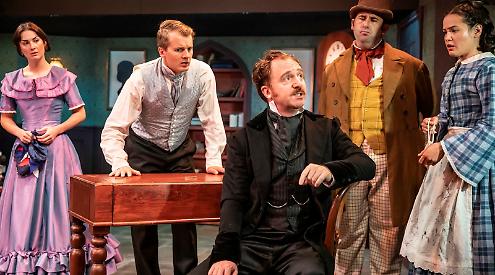 Its inevitable translation for the stage is now delighting audiences with an onslaught of quick-fire puns and Dickensian references.

To describe the play as a romp would be to do it disservice. It is so much more. Frenetically paced, it is a mixture of blatant comedy and absolute absurdity that is reminiscent of a blend of Round the Horne, The Goon Show, Monty Python and Little Britain.

In a hilarious pastiche of all the Dickens novels you have ever read, Sir Philip Bin (Nicholas Murchie) narrates his early life with all the tragedies and disasters that you could think of, which are happily redeemed in the final act by an earlier chance encounter in a churchyard with an escaped convict, Bakewell Havertwitch (Colm Gleeson). Somehow that rings a bell…

Designer Katie Lias has come up with an imaginative and effective set featuring a huge pile of Dickens’s books and props, though a few were excellent, ranging from a “middle-class” sword made from sourdough to a puppet courtroom jury that could apparently nod and shake their heads at the pull of a string.

Evans has provided a book that is both intelligent and outrageous, peppered with puns and in-jokes that will keep you engaged and entertained from the first scene when the young Pip (superbly played by Dom Hodson) sets out on his eventful journey through life by being sent to St Bastard’s, a boarding school with its cruel and threatening headmaster, Mr Hardthrasher.

Dan Tetsell is wonderful in the part and wrings every threatening nuance from each of the three brothers and a sister that make up the Hardthrasher family.

The cast, immaculately directed by Caroline Leslie, is outstanding. Simon Kane is a villainous ironically-named Gently Benevolent and if he had a moustache he most certainly would have been twirling it.

Alicia McKenzie as Pip’s hapless mother Agnes Bin and the unfortunate Flora Dies-Early (who has the inside of her wedding ring poisoned and therefore expires at the altar) completes a fabulous line-up.

In less capable hands, this play could be pure ham but the intelligence of the writing and the expertise of the cast ensures an evening of pure fun and enjoyment.

Any play that has the audience rocking with laughter throughout and cheering wildly at the end is surely the tonic that we have all been looking for.