Little bit of Shakespeare performed by little ones 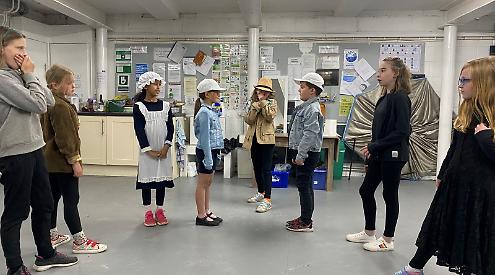 CHILDREN will present five of Shakespeare’s works in a short, modern and fun way in Wallingford next weekend.

Diana Christie, of Encore, the youth theatre of the Sinodun Players, has written abridged versions of Macbeth, Twelfth Night, The Tempest, The Taming of the Shrew and A Midsummer Night’s Dream.

The children will take a journey through forests, islands and royal households. There will be colourful scenery, a magical light show, surround sound, weddings, fights and aliens.

Diana’s work has been made much easier by the three groups of children taking on the challenge with gusto. She says: “They’re brilliant and they’ve always been enthusiastic.”

Footlights (years 3 to 5) are taking on Macbeth and Twelfth Night, Limelights (years 6 to 8) are doing The Taming of the Shrew and The Tempest and Spotlights (years 8 to 10) will be doing A Midsummer Night’s Dream.

Diana says: “The plays are complete, so you see the whole of Macbeth and the whole of Twelfth Night but obviously in about 10 or 15 minutes, so completely abridged and really modernised. Because everyone dies in horrible ways in Macbeth that’s a bit much for a seven-year-old, so actually our version turns them into aliens.”

She says the support of the children’s parents has been invaluable.

She explains: “The Sinodun Players have got masses of costumes but for adults, so I asked the group, ‘Right, what do we think so-and-so would wear? Who’s got that?’ and they were like, ‘Well, I’ve got a black dress that Lady Macbeth can wear, I’ll bring it in next week’. They’ve all sourced bits at home for each other.

“But I don’t want the children to go on stage thinking about a lot of props or costume or lighting or set.

“I want all of that to be taken out of their hands so that they can just go on and focus on what they’re meant to be doing, acting, and enjoying it. I want them to come off stage having enjoyed it. I don’t want a child sitting doing nothing and waiting for one scene and a lead part that’s got all the lines. It’s an ensemble piece. I’d rather have an inclusive environment where everyone’s enjoying it than a perfect performance.”

• Shakespeare Shake-Up! is at the Corn Exchange, Wallingford, on Friday and Saturday, June 24 and 25 at 7pm, with a Saturday matinée at 2pm. Tickets cost £6 adults, £4 under-18s. For more information, visit cornexchange.org.uk