Comedy of crossed-wires is about to get fast and furious 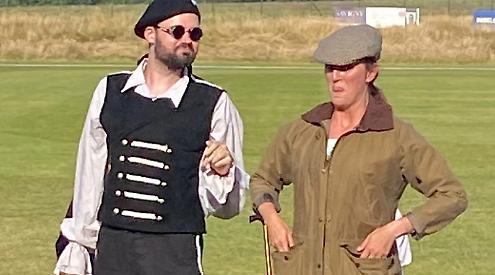 FINE wine, nibbles, a little dramatisation, all these are on offer with an adaptation of Shakespeare’s Much Ado About Nothing when it comes to Oaken Grove Vineyard in Fawley over several weekends in July and August.

It will also be performed at Henley Cricket Club in September.

The show, which is 90 minutes long with a 20-minute interval, is directed by Heather Simpkin and produced by her son, Sam Ranger, for Bear In The Air Productions, the company behind the Kenton Theatre’s 2021 pantomime Cinderella and 2019’s Sleeping Beauty.

Much Ado About Nothing looks at the love between Claudio and Hero, and the comic banter between adversaries Beatrice and Benedick, before their friends plot to make them fall in love. Sam says that the abridged version of the play will have live music and comedy, with a fun, fast-paced aspect to it.

The six-strong cast will be playing multiple roles, with Ross Telfer appearing as Benedick and Watchman 1, Hannah Eggleton appearing as Beatrice and Watchman 2, Charles Stobert as Don Pedro, Megan King as Hero and Borachio, Toby George-Waters as Claudio and Sexton and Conor Cook playing DonJohn, Friar Francis and Dogberry.

The choice of outdoor venues partly arose out of necessity, with the restrictions of the coronavirus pandemic. Sam said: “Because of regulations, we could only do outdoor shows. We started last year with Twelfth Night and just did Henley Cricket Club, the idea being to raise some money for the club.

“It’s wonderful to be able to perform at the cricket club, with the trees and the views and things. It’s beautiful down there, and also at the vineyard, how nice that is, too.

“We did nine clubs last year and I think we’re at 25 shows so far [this year], so it’s growing well and it’s actually popular — and it’s a lovely thing to be able to do.”

Sam, 28, who grew up in Henley, says that his mum Heather has been a stalwart when it comes to helping raise money for the club, particularly in 2005, when the club’s fundraising committee was buying it from the council.

He said: “Bear In The Air is a family company. My mum is one of the directors and is heavily involved with the cricket club. The fundraising committee started the cricket club ball and they do regatta parking, which helps. We were thinking of ideas to help raise money for them now — I’ve been a member since I was four — so we were like, ‘what can we do?’ I’d just got back from drama school and was like, ‘let’s put on a show!’.”

The range of venues has expanded to include vineyards, he says: “We’ve added Oaken Grove in this year. Rather than just cricket clubs, we thought we’d see who else might want it and vineyards have become quite popular, actually.”

Sam has found the new venue inspiring and is full of ideas for the future.

He says: “We’re doing five shows there, which is awesome. Just in front of the vines, they’ve got a really nice lawn area and then they’ve got this undercover area. They’re going to be doing charcuterie boards and serving local cheeses from Nettlebed. People can drink their wine under this patio cover, with a nice lawn, looking out over the show and with the vines it’s actually kind of perfect.

“We joked when we were there that we’re going to build a little outdoor theatre in a few years and camp out there.”

• Bear In The Air Productions’ tour of William Shakespeare’s Much Ado About Nothing comes to Oaken Grove Vineyard in Fawley on Sunday, July 24 at 1pm and 4pm, on Saturday, July 30 at 6pm and on Sunday, August 7 at 1pm and 4pm.

It will also be performed at Henley Cricket Club on Sunday, September 4 at 5pm. Tickets cost from £8 to £15 (not including pricing for food and drink) and are available from www.muchadotour.co.uk