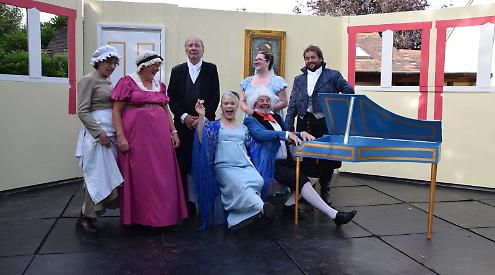 AN amateur theatre group which put on its first outdoor production when the coronavirus lockdown restrictions were eased found it to be so successful that it is back, with a respectful parody of Jane Austen.

Dorchester Amateur Dramatics Society performed The Wind in the Willows as part of the Kenton Theatre’s 2021 Summer Roadshow at Peel Fold in Mill Lane, Henley. This time, they are following in the footsteps of Illyria Theatre and can be seen on Rupert House School playing field, Fair Mile next week over three nights with Mansfield Park and Ride.

Director Mark Wilkin says: “Last year was our first outdoor production, which we thought we’d do because we were coming out of lockdown and we weren’t sure as to how people were going to feel about being cooped up in a hall or theatre.

“It seemed to be absolutely the right choice, because we sold out every performance in Dorchester and we sold nearly 400 tickets in Henley. I offered the production to the Kenton knowing they’d probably suffered like every theatre in the land during the pandemic, and then we found ourselves part of their first summer roadshow.”

Mark was able to get some advice on performing alfresco from his friend, professional actor Ed Simpson, who is playing Frederic in Illyria Theatre’s Kenton Summer Roadshow production of The Pirates of Penzance. He says: “I’ve always admired what they do, so that was an inspiration for doing it outdoors.”

A spoof of Regency-era novelist Jane Austen’s novels, Mansfield Park and Ride was originally written by playwright Brendan Murray for Ipswich-based theatre company Eastern Angles and contained nods to local landmarks. Mark said: “He based it in East Anglia, in Sheringham and Cromer and places like that. I read it and liked it and contacted him and he said, ‘Well, if you like, I’ll rewrite it for your area’, which he’s done. So of course Henley features.”

After reading the play, Mark did some research and found that Jane, who attended The Reading Abbey Girls’ School (a different school to the one that exists now) for 18 months in around 1875, had actually spent some time in Harpsden. He says of Jane: “She would have had knowledge of this area and her mother [Cassandra] lived in Harpsden.”

Cassandra’s father, Jane’s maternal grandfather Thomas Leigh, was the rector of Harpsden and Jane used to visit cousins there with her sister, also named Cassandra.

The new South Oxfordshire-focused version looks at Austen’s works with light-hearted, affectionate humour. The play asks the ever-pressing questions: Will Mrs Bonnet see her daughters wed? Will Captain Knightly keep his shirt on? Mark says: “It’s not giving too much away to say that the first family we meet are the Bonnet family. There are nods to things like Colin Firth getting his shirt wet and all those sorts of things. There’s a young lady called Fanny, who’s going to marry her cousin.

“It’s clearly a spoof. There are bits from all the novels which people who are Jane Austen aficionados will recognise, but you don’t need to be a Jane Austen fan in order to enjoy it.

“You’re forced to read it at school and you think, ‘Oh, I don’t know whether I like this’ but actually, when you go back to them with more mature eyes, then you do enjoy them.”