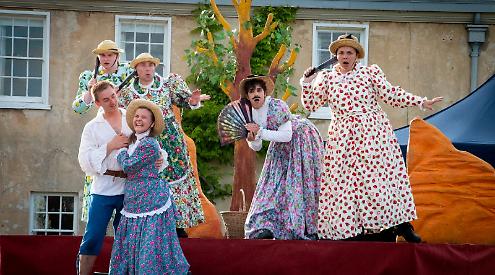 A TOURING open-air theatre company is bringing a comic opera with a nautical theme to Henley tomorrow (Saturday).

Illyria Theatre, which is celebrating its 30th anniversary this year, kicked off its production of Gilbert and Sullivan’s comic opera The Pirates of Penzance in Devon and followed it up with a six-night stint at the Minack Theatre in Porthcurno, Cornwall, overlooking the Atlantic Ocean. The company first appeared in Henley last summer for the Kenton Summer Roadshow at the rugby club, performing another of the Victorian collaborators’ comic pieces, HMS Pinafore, and will drop anchor at the Rupert House School playing field in Fair Mile.

W. S. Gilbert and Arthur Sullivan’s piratical tale tells the story of Frederic, who has been apprenticed to the pirates since childhood. He discovers a hiccup, that rather than being emancipated when he reaches his 21st year, he is contracted to the Pirate King until his 21st birthday — and as he was born on February 29 in a leap year, he will be 84 by the time that day comes. Frederic has only the Penzance constabulary to look out for him, while he hopes that the endless patience of his sweetheart, Mabel, will hold out.

Featuring the well-known tongue-twister I Am the Very Model of a Modern Major-General alongside other classic songs such as I Am a Pirate King and A Policeman’s Lot is Not a Happy One, this hilarious satire is full of melodies and melodramatic moments.

Directed by Oliver Gray and produced by Stephen Badham, the music has been directed and orchestrated by Richard Healey. Choreography is by Kim Healey and costumes have been created by Pat Farmer, while the scenery is the work of Alan Munden and Jill “Wigs” Wilson.

Producer Stephen Badham says: “With the regatta, it’s quite good to have some pirates sailing into Henley. It’s a mixed cast, with three women, one non-binary actor and two male actors, playing multiple roles. We play around with the gender roles in the show, so the Pirate King is being played by a non-binary cast member and we have men playing women and women playing men — and we make a lot of fun out of that as well.”

The six cast members are MacKenzie Mellen as the Pirate King, Edward Simpson as his lieutenant, Samuel (also playing Major-General Stanley), Philip Broomhead as Frederic, Sarah Pugh as Ruth (a pirate maid of all work) and Amy Lockwood as the Sergeant of Police. General Stanley’s daughters Mabel, Edith and Kate are played by Rosie Zeidler, Sarah Pugh and Amy Lockwood, respectively.

They also fulfil the roles of pirates, daughters and police officers and for certain performances, Illyria has welcomed special guests the Bishop of Penzance, Her Majesty Queen Victoria, and Death.

While the show contains every word of dramatist Gilbert and composer Sullivan’s entire libretto, Stephen says it is still a fairly irreverent take on the comic opera. He says: “It’s a little bit like punk rock meets Gilbert and Sullivan but we aren’t an incredibly faithful adaptation as you might expect to see in an opera house. People who are purists come and see us and they can’t quite believe what we do. It’s bawdy, it’s fun, it’s a laugh a minute — expect the unexpected.” Illyria Theatre takes its dramatic responsibilities very seriously. Stephen says: “We like to make sure that we give people a proper theatrical experience, we don’t make excuses for being outdoors. We’ll be on our touring stage — a full 7m x 5m stage, with scenery.”

The team is a hardy bunch and able to take all weather conditions in its stride. Stephen says: “We think cricket is for wimps — rain doesn’t stop play. We perform in all weathers. I could probably count on two hands the number of times we’ve had to cancel — and if we do, we’ll always come back to the venue, so we’ll try and postpone the show, rather than fully cancel it.” Raincoats and sunhats at the ready.

• Illyria Theatre presents the Kenton Summer Roadshow’s The Pirates of Penzance, at the Rupert House School playing field, Fair Mile, Henley, starting at 6pm. Tickets cost £18, concessions £10, suitable for ages five and over. For more information and to book tickets, call the Kenton Theatre box office on (01491) 525050 or visit www.kentontheatre.co.uk