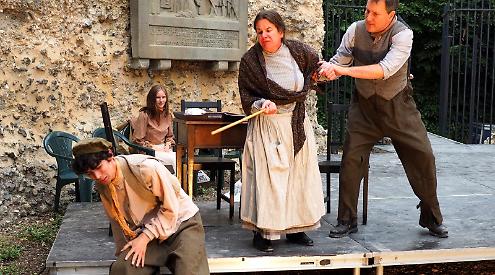 We all get behind young Pip making the most of chances that come his way — but who is his mysterious benefactor?

John R Goodman has ably condensed a lengthy novel into an evening’s dramatic entertainment. John’s direction ensures a well-orchestrated mix of scenes. Sometimes there’s lively action involving several characters; at other times, just two characters take the stage to reveal their feelings or confront each other.

The mood ranges from poignant to comic and the passage of time is wittily signalled by members of the cast. The production plays out on a plain stage, a range of interiors conjured up by clever use of simple props. Costumes evoke the 19th century setting.

Dean Stephenson is engaging as Pip, who we meet as a hesitant child and watch as he grows to maturity. Well done to Dean for commanding such a massive role as the central character.

Pip has been brought up by his sister (ferociously portrayed by Juliet England), who is married to kindly, steadfast blacksmith Joe Gargery, endearingly played by Paul Gittus. Pip’s circle is completed by the resourceful Biddy (an energetic Nancy Gittus), who is truly supportive of her friend.

Ali Carroll is suitably eccentric and imperious as Miss Havisham, whilst Evie Stonehouse gives a poised performance as the haughty, cold Estella. When summoned to Miss Havisham’s house to play, Pip is belittled by Estella and thus begins a tumultuous relationship between the pair.

Peter Cook brings great composure to his portrayal of lawyer Jaggers, who facilitates Pip’s access to money and a new life in London.

In the city, Pip must make new acquaintances and learn new ways. He comes back into contact with Miss Havisham’s relative, Herbert Pocket (a lively Dylan Collie) who this time befriends Pip and explains Miss Havisham’s back story. Pip also finds an ally in the clerk Wemmick, played cheerfully by Jackson Dale. But Pip’s great expectations are not easy to manage. Things become complex and unwelcome truths come to light.

Peter Knightley is bluff and likeable as returned convict, Magwitch, whilst Filton Kingswood is chilling as the despicable villain, Orlick. Dramatic events unfold: deaths, pursuits, a fire. Pip finally learns that there are values more important than social position.

This being England, it rained for the opening night but the cast played gamely on and the downpours did not dampen the spirits of the audience. This production represents a great team effort and makes for a truly memorable evening. As Joe would say: What larks!