Sassy, stomping and slinky with verve 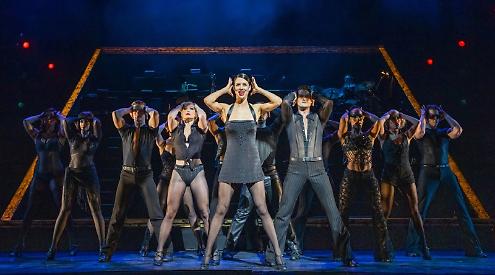 IT’S the Twenties. Some people will do anything, up to and including murder, to become celebrities. Sex and scandal make headlines. But being notorious isn’t easy.

Just to be clear, this is the 1920s and the setting is Chicago in the era of prohibition, illicit nightspots, Al Capone and all that jazz.

The welcome revival of Chicago the musical now at the New Theatre in Oxford shows us that justice might be a branch of showbiz, that celebrity has always been a bit of a drug, and that media manipulation is nothing new.

When Roxie Hart (Faye Brookes) shoots her lover she’s carted off to Cook County Jail. Facing the noose, she persuades her gullible husband to scrimp together the $5,000 necessary to hire hotshot lawyer Billy Flynn (Lee Mead). But the jail already contains another queen bee in the shape of Velma Kelly (Djalenga Scott) who violently disposed of her husband and sister after finding them in bed together.

In fact, the jail is full of women who have got rid of their other halves because ‘they had it coming’ in the words of Cell Block Tango.

Rivalry springs up between Roxie and Velma as they fight for the spotlight and the bigger headlines, under the calculating eye of the cell block “mama” (played by Sinitta). The glamorous and unrepentant murderesses might almost be sisters, never forgetting that Velma has already killed hers.

Chicago is a thoroughly cynical musical and all the more enjoyable for it.

Perhaps the only moment of pathos in the evening is when Roxie’s schmuck of a husband Amos (Jamie Baughan) sings the number Mr Cellophane. He gets a big round of applause. And the only moment of real seriousness is when one of the Cook County inmates is actually hanged for murder, something which jolts Roxie into facing reality.

Otherwise, this is an evening which is sassy, stomping and slinky, performed with verve and style by a talented cast who gave it their all.

And be reassured: it’s hot outside and hot in every sense on stage but the theatre is comfortably air-conditioned.