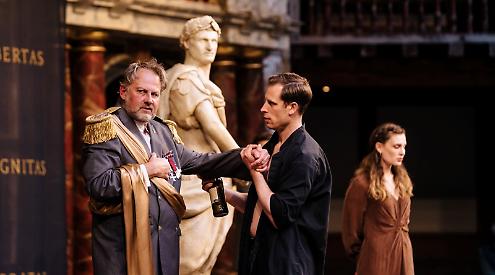 THERE are only two women’s parts in Shakespeare’s Julius Caesar and they are both quite minor. So, it was an innovative decision by Diane Page, director of the Globe’s new touring production, to give the key roles of conspirators Brutus and Cassius to Anna Crichlow and Charlotte Bate.

They are up against a masculine world embodied in Julius Caesar (Dickon Tyrrell), Mark Antony (Samuel Oatley) and Caesar’s nephew Octavius (Jack Myers). Straightaway this gender difference gives an edge to the hostility between the two camps.

As everybody knows, the assassination of Caesar — the most famous in history? — succeeds but after that it’s downhill all the way for the band of conspirators.

The play is about power, how to hang on to it, how to wrest it from others. The only ethical considerations come from Brutus, something which the gender casting may make more pointed. It was a bit surprising then that Antony’s final praise of Brutus was dropped at the end, presumably because it contains too many masculine references.

This is a compact production with Arnie Francis, Omar Bynon and Cash Holland taking multiple other parts. It’s played out against a simple backdrop of banners and a statue of Caesar toppled after the killing.

Clear and vigorous speaking guide the audience through this always relevant drama. Then, at the end, the cast does a little dance just as they would have done on the stage of the original Globe 400 years ago.