Video: Prepare for The Full Monty! 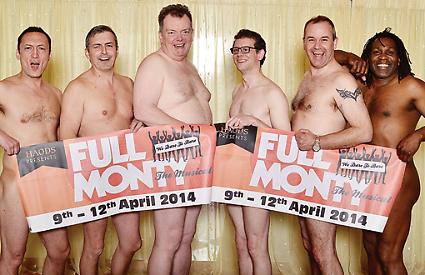 A MUSICAL version of The Full Monty will be staged in Henley next month — and this time, the cast are going all the way.

Click here to watch our behind the scenes video with the cast and crew of The Full Monty.

Adapted from the 1997 British comedy, the former Broadway and West End show follows six unemployed American steelworkers who reinvent themselves as strippers. But unlike the film version, which coyly cut away from its stars’ nether regions, director George Riddell has promised nothing will be left to the imagination.

The 48-year-old, who is directing for HAODS at the Kenton Theatre, has staged it at three other venues in the past and says it’s bound to be a raucous affair.

He said: “I directed a version of the show in Tring last year and I reckon maybe 90 per cent of the audience were ladies — scary, scary ladies. It’s fair to say they may be a bit more vocal than the typical Kenton audience. They’ll all be screaming their heads off once they’ve had a glass or two of wine.

“We’ve even had a hen party book the entire front row for the Saturday matinée so that should be really interesting for the cast. It’s not a pantomime, but the audience will definitely have their say.”