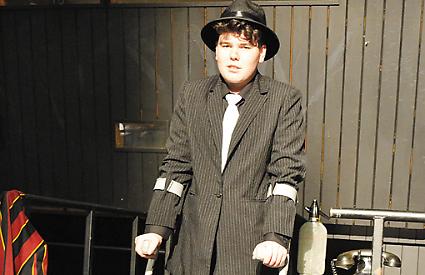 IT’S supposed to be good luck when an actor breaks a leg but 16-year-old Rauridh Sheppard is not so sure.

He appeared as Fat Sam in the Shiplake College production of Bugsy Malone despite fracturing his tibia and dislocating his ankle while playing rugby six weeks ago.

Rauridh, of Hawthorn Way, Sonning, says he was determined that the show should go on.

“It was only when I got to the hospital that I realised there would be all these things that I wouldn’t be able to do and the play was one of them.

“I hoped I could still do it because I wanted to but we had to think of another way to stage it.”