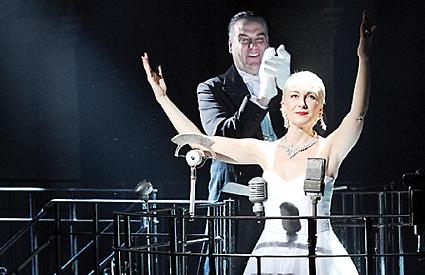 THE clever thing about this show is that you never really know whether you like and trust the heroine: Evita Peron, the darling of Argentina.

You can’t help admiring her for her beauty, charisma and sheer guts. Then again, there are moments when you can’t help thinking she’s a corrupt opportunist who’s only in it for the power and money.

However ambivalent you may feel about her— and if nothing else the real-life Evita certainly did divide opinion — she is brought to life with real razzle-dazzle in this show, earning a standing ovation for leading lady Madalena Alberto and Marti Pellow as her enigmatic shadow, Che.

This Andrew Lloyd Webber/Tim Rice musical has endured because it’s a great rags-to-riches story and because the music is so fine. Every song is a belter, and many of the numbers in the first half are rumbas and tangos and salsas, evoking the true spirit and glamour of Latin America in the Forties.

This particular production has the added bonus of fabulous choreography. As the flirty young Evita Duarte shimmies and sashays across the stage in her floaty tea dress, tossing her black curls over her shoulder, it’s easy to see how she was destined for greatness even as a teenager. Pellow is looking a little more grizzle-chopped now than in his Wet Wet Wet heyday, and he’s a pop singer, so his diction is not as clear and his voice not as strong as the other male leads. Nevertheless, he has the personality to pull off this narrator role. He is present in practically every scene — although he appears to be invisible to the other players — and like some ghostly eminence gris he hovers over the action in his combat gear and beret, spitting sarcasm and scorn over the “tasteless phenomenon” of Evita’s success.