Mystery serves up death and deception 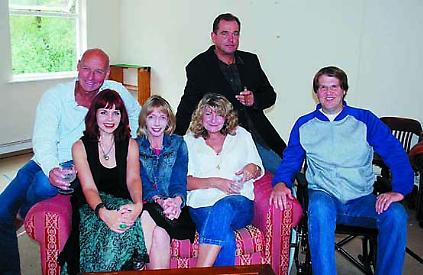 A THRILLING murder mystery is coming to The Mill at Sonning next month.

A Party to Murder, written by Marcia Kash and Doug Hughes, brings together a renowned cast and creative team for a dark tale of double-crosses, secrets and murder most horrid.

The play is a skilful homage to the mistress of murder, Agatha Christie.

Her portrait sits over the fireplace in the living room of a rustic island cottage where six people have come in secret on Halloween to a murder mystery party.

The guests, played by Angela Sims, David McAlister, Elizabeth Elvin, Jeff Mash, Jeremy Gittins and Michelle Morris, appear set for a weekend of fun until ghosts from the past begin to haunt the proceedings and it becomes clear that not all is as it seems.

The game takes a sinister turn when when guests begin to die and the remaining players realise they are playing for their lives. Secret passageways, incriminating letters, hidden bodies and a mystery unsolved for 25 years twist and turn toward the unexpected and terrifying conclusion.

Directed by Ian Masters, the play will have you gasping with shock at every turn.