Review: Antidote to the January blues 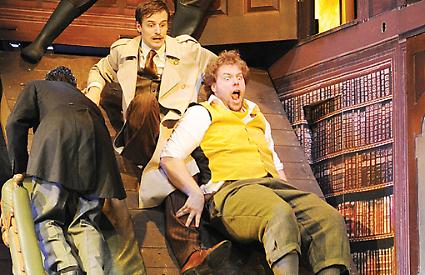 ABOUT 30 seconds into The Play That Goes Wrong I was laughing. Two minutes further on I was crying and my face was aching. That’s how it stayed for the next two hours. This is a very, very funny play and the perfect remedy for the January blues. I saw it on Monday and will probably still be laughing when you read this.

There were times when I struggled to breathe because I was so creased up. The play is a murder mystery, but there’s no point in trying to explain the plot — save to tell you that the inspector did it — but honestly, it doesn’t matter that you know, it’s not the point of this show at all.

This brilliantly funny piece pays homage to generations of am-dram enthusiasts who regularly go through the agonies of trying to be professional without knowing how. The writer Michael Green first coined a name for it more than 50 years ago: Coarse Acting. Entrances are missed, dialogue forgotten or repeated, weapons don’t function, doors don’t open, scenery falls down, props are misplaced... and so on and so on.

Mischief Theatre’s take on the Christie-esque country house murder mystery owes an enormous debt to Green who wrote dozens of coarse plays based on his own disastrous experiences in am-dram. But the company at the Oxford Playhouse not only pay back that debt, they add interest and take Green’s ideas to new heights.

All of his favourites are ticked off the list: looping dialogue, mobile corpses, mis-timed everything, inappropriate sound and visual effects, and more, until the list is exhausted. Then they add some more — watch out for white spirit substituted for sherry.