Poignant reminder of the effects of War 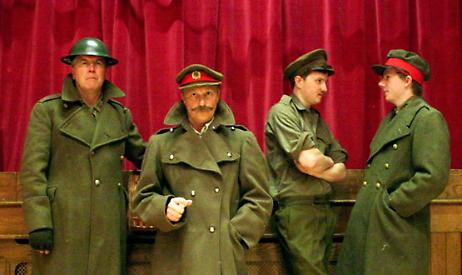 You probably know about the Your Country Needs You Kitchener recruiting drive in the First World War, set up to recruit battalions of local lads and hey presto , a stronger all for one and one for all fighting spirit.

Like most politicians and military men Kitchener failed to see further than the end of his next term of office. Did no-one stop to think about the decimation of local communities should the worst happen and whole battalions be lost?

Such was the fate of the Accrington Pals - 720 signed up, 584 killed or wounded on the first day of the Battle of the Somme.

That left quite a few grieving women back home in Accrington and it is these women that playwright Peter Whelan uses as the mouthpiece of his 1981 play, The Accrington Pals.

What more fitting play for the Henley Players to offer us in this 100th anniversary year of the start of First World War?

And a very creative production it is: well performed, well directed, exciting use of contemporary techniques such as powerful projected backdrops rather than more conventional scenery, a grim and gloomy set, attention to detail with props and uniforms.

The deafening sound effects of battle are chilling and well used but could have been longer to torture the audience more. The script could do with the red pen treatment to delete much of the polemic but the Henley Players must work with the script as it is. That said, there is so, so much to chew on in this play - more than can be explored in a brief review.

It is the women who hold the floor in The Accrington Pals and a fine variety of characters they are. The male characters are less developed and so less interesting to the audience but that is the focus the play dictates, not the fault of the actors. Theres plenty of Lancashire smutty humour - listen out for those one liners.

As the women see their men off to war their awkwardness is palpable: should they be celebrating their naive courage? Be furious with them for being seduced into joining up? Reveal their true feelings? Or stay buttoned up?

May (Hannah Roberts) is the anti-war voice throughout. Her very strong, controlled performance is outstanding. She holds the line better than any soldier while allowing us a very few glimpses of the conflicted, inner May. Ten out of ten for Hannah Roberts.

Sabrina Fawcett as the idealistic Eva, Janice Selkirk as the ever so slightly raunchy Sarah, Aimee McGoldrick as Bertha and Pam Pitts as Annie Boggis (who really comes into her own in act two with a startling breakdown) all play their parts in perfect character. And I didnt spot a single lapse of the Lancashire accents.

The young Jude Mawbey deserves special mention for his portrayal of Reggis Boggis, constantly harangued by his bitter mother but beginning to stand on his own two feet by the end of the play.

The Accrington Pals is especially relevant today as our politicians sabre rattle around the Middle East - the consequences of war are as messy, as bloody, as chaotic today as they ever were.

If you do nothing else to commemorate the lives lost in the Great War, see this Henley Players production, even if you have never supported them in the past.

I wish them full houses every night - this memorable production certainly merits that.