IT is hard to believe that when this Noël Coward play was first performed back in the Twenties it was slated as silly, unfunny, disgraceful – even vulgar. The current version touring the UK is a far cry from that.

It is entertaining, charming and created so much of a reaction from the audience that there were tears of laughter throughout the theatre.

Leading ladies Jenny Seagrove playing Julia Sterroll and Sara Crowe as Jane Banbury had you hooked from the off. The play begins in Julias flat in London, where she tells her husband Fred that after 12 years of marriage the passion she felt at the beginning has burnt out, to be replaced with love on another level. Somewhat bemused, he sets off for a weekend of golf with his friend, Willy.

Willys wife Jane arrives in a flap, reporting that she has received a letter from Maurice, an old flame of both of theirs, saying that he is on his way to England. And so begins a raucous evening of rivalry.

They plan for his arrival with a glass of Champagne, discuss the chances of them cheating on their husbands with a Martini, then switch back to the bubbly while they fight over their magical Frenchman. In the end they make a pact that what will be will be, and when its all over they will go back to being lifelong friends. Cowards insight into a womans mind is really quite amazing.

Jenny Seagrove was fabulous as the sarcastic Julia and Sara Crowe had the audience laughing out loud with her hopeless inability to control her emotions.

Gillian McCafferty, as their butler Saunders was funny and quirky and had great presence. 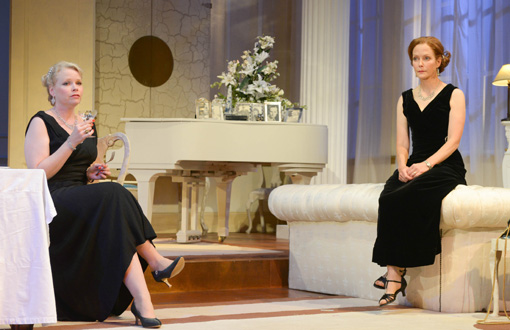