HAODS does the Full Monty

FOR a show advertised as “We dare to bare”, this production by HAODS certainly lived up to its billing - not only for the final show-stopping display by the boys at Tony Giordanos nightclub but also for the sheer energy levels which were maintained through the whole production to create an evening of shining enjoyment and fun.

This new version, freely adapted from the original, set in Sheffield, and transported with music to Buffalo in the US, brings new pathos to the human condition and how these men managed to rise out of their misfortunes to make something of themselves for self-respect and gain the support of their families after the closure of the steel mills.

The staging was very apt and slick through the 29 scenes varying from the nightclub, a park bench and even a cemetery. The set had just the right amount of run-down tat, especially in the gents toilet of the nightclub. It was amply supported by atmospheric lighting to great effect, well done, Jerry Anderson and Derek Gilbert.

The on-stage band were excellent under the direction of Peter Dodsworth, although I understand that Andy Smith was MD on the opening night. One small gripe is that the music was sometimes too loud for the singers and they occasionally struggled to make themselves heard.

With a cast of 27 plus a dog, it is difficult to select stars as they all managed in their own ways to shine and create distinct personalities. I must congratulate the gaggle of girl groupies following the Chippendale acts. Karen Duplessis, Vicky Lane, Katie Healy, Kelly Britton and Jennamarie Smith combined well in their vocal support for the guys. One excellent moment was Susie Longshaw attempting to use a mens urinal.

Among the supporting roles mention must be made of Mike Fields as the silent tramp in the park bench scene, a master at scene stealing.

Julie Huntington created a wonderful world-weary pianist who once rejected Warren Beatty, entertaining us with her wisecracks as she played honky-tonk for the boys.

The long-suffering wives of the redundant steel workers were played, often with much pathos, by Vick Lane and Katie Healy.

I have left the boys until last. They are the mainstays of the show and we feel great sympathy for them in their social rejection as they lose their jobs and self-respect. All of them created real characters which never once became caricatures.

There was wannabe masculine Ethan (Piers Burnell) hurling himself across the stage trying to emulate Donald OConnor in Singing in the Rain, eventually discovering his sexuality with sad, lonely Malcolm (James Pankhurst); Tim Bell, as Horse, with a gammy hip, (why is my manhood so small?); pathetic Harold, (Paul Freeman), too timid to inform his wife of his redundancy until the bailiffs arrive.

Lastly there is the duo of Dave (James Lole) and Jerry (Kevin Goodfellow). This unlikely dramatic pairing works so well in this show, giving support to each other, with Dave worrying about his weight and Jerry trying desperately get enough money together to maintain contact with his son, Nathan. (Ryan Gibson and Max Riley). Both sung extremely well in demanding numbers and worked well together.

The final scene at Giordanos when Hot Metal go for the full monty was a triumph. Just for once the men became the “objects” for the ladies who all vociferously encourage the boys as they discard security guards uniforms to reveal their skimpy red thongs.

What was revealed next? Well, Ill leave it to your imagination.

Well done, George Riddell. A professional direction if there ever was one. You brought out all the stops for the enjoyment and pleasure of Henley. Thanks you very much for a wonderful night out. 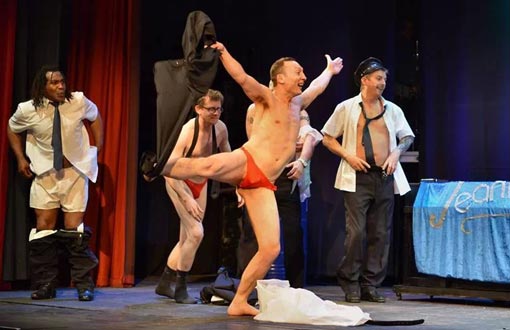