Classic will 'Live, live, live!' on 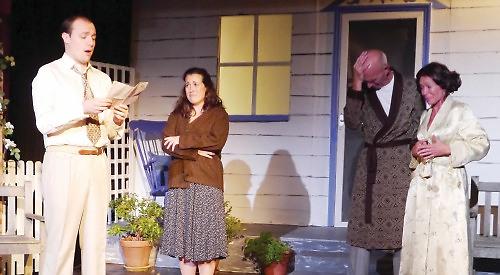 WITH a rolling rumble of thunder, a flash of lightning and the crashing down of a tree, Wargrave Theatre Workshop’s production of Arthur Miller’s All My Sons got off to a dramatic start at the Woodclyffe Hall and set an ominous mood for this emotional drama.

One of the modern theatrical classics, this Arthur Miller three-acter picks apart the dark underbelly of the American Dream through the disintegration of one family in the immediate aftermath of the Second World War.

It’s an ambitious challenge for any theatre company, and the experienced cast, under the talented partnership of director Joe Haynes and producer Joy Haynes, took it by the scruff of the neck and gave it their all. Yes, those were real tears in the fraught closing scenes.

However, there are soon hints that all is not quite as it seems. Joe wisecracks and backslaps, but his twitchiness reveals his terrible fear that his dark secret will be revealed: that it was he, and not his jailed business partner, Steve, who allowed faulty plane parts to be shipped out, resulting in the deaths of 21 pilots. His wife Kate (an emotionally gruelling performance by Grace Tye) cannot accept their son Larry, a pilot missing in action, will never come home; and their other son Chris (Alex Hobbs, deftly running the gamut of emotions from youthful idealism to mature acceptance) has returned from the war to find his friends and home town untouched by the horrors he witnessed.

It’s the arrival of Ann Deever (portrayed by Jill Sikkins as a pretty ingenue with an unexpected strong streak) that proves to be the catalyst that brings the house of cards tumbling down.

As Larry’s girl, she is expected to wait for him, but Chris wants to make her his wife, and as Steve’s daughter, she is taken step by step by the other characters in the unmasking of the real culprit.

Neighbour Sue Bayliss (Chris Christie, in a tightly controlled and moving cameo) shockingly tells her that everyone knows Joe was the real culprit, but they are still happy to enjoy his hospitality.

The unexpected arrival of Ann’s brother George (John Gonzales, bringing a real sense of danger as he veers from simmering anger to fisticuffs) ratchets up the tension. In a bittersweet scene, Lydia Lubbey (Emmajane Hughes, fizzing with energy) reminds him of the girl he left behind.

It looks as if Joe can manipulate the truth one more time, but an idle boast torpedoes his alibi and all is lost. The hairline cracks in the doomed planes’ cylinder heads are mirrored by the fracture in the Keller family, which has been papered over but finally cracks apart as each member has to acknowledge what they have always known in their heart.

Chris the idealist accepts that the father he adored is no better than anyone else; Kate, rocked by the revelation of Larry’s suicide letter, condemns her husband; and Joe, who has continually avoided the blame for his actions by saying he did it all for his family, finally realises that the 21 dead pilots are “all my sons”.

The final shocking scene is only made bearable by Kate’s entreaty to Chris: “Live, live, live!”

From the drama of the opening scene (lighting by David Williams and sound effects by Alan Fear), the evocative suburban backyard (set design by Sheila Williams with the help of Martin Lorenz, Henry Marchant and Peter Hughes and properties by Wendy Roberts) and period costume (wardrobe mistress Maureen Fennemore, with make-up and wigs by Holly Jordan), the Wargrave Theatre Workshop production team vividly brought to life Forties America.