Forget Calendar Girls — this WI tale's about another type of date 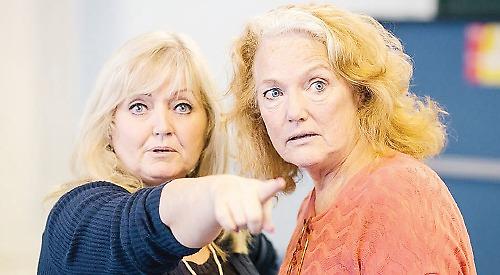 AMONG an audience packed with visitors from local Women’s Institutes, we sat back and pondered this intriguing true story of Jean Johnson and Shirley Landels from a Hampshire WI setting out to try and legalise prostitution and help girls off the streets and into some form of security.

With a mix of serious messages and saucy humour and some catchy tunes, there were giggles, titters and hoots of laughter throughout, cucumber sandwiches notwithstanding.

Louise Jameson was well cast as Jean, while her dear friend Shirley, played by Trisha Deighton, was adept at comedy timing and catching our sympathy, waving her stick determinedly.

Linda Nolan as matriarch brothel madam Holly Spencer strutted about her Blue Saloon, protecting her brood of feisty girls and welcoming in the clientele, supplying tea, sympathy and a certain something.

Holly’s girls included a policewoman, a law student, a domestic abuse victim and a Polish girl, all with their own particular struggles and achievements.

As the buzzer continually went off and Holly let in the clients, the arrival of a vicar caused much amusement — presumably he was focused on the tea and on providing his own sympathy. In the meantime, WI member Celia is less than supportive, while DC Hecks has her own vengeance to wreak. I thought Mags (Claudia Cadette) and Shirley brought out sympathy for the underdog very well.

With side slides helping to illustrate where we were in the world for each particular segment, we travelled with Jean and Shirley from the darker corners of Portsmouth to the Netherlands, Nevada and New Zealand as part of their mission to seek out a nice, happy brothel set-up where the residents were healthy and secure.

Where the Blue Saloon was almost like a cosy-ish taxi rank, Amsterdam was portrayed as clean and clinical but depressing, Nevada was loud and fun, then depressing, while New Zealand seemed to have come up with the most pragmatic, optimistic arrangement of small and big owner-operated brothels (aka SOOBs and, of course, BOOBs). I loved the nicely done in-joke where the girls were seen back in the Blue Saloon while a remix of I’m In the Mood for Dancing played in the background.

This show managed to cram in a mix of cheery, upbeat numbers, meaningful and poignant solo songs and individual storylines alongside the overriding (so to speak) themes and sex jokes.

It was well-acted and sung, and the only downside of attempting to cover so much ground was that some of the character arcs felt a little clichéd, with DC Hecks’s about-turn, from religious zealot to lascivious lesbian and back to zealot, feeling a tad far-fetched (although well-acted).

However, all sins considered, as it were, the amount of ground this production covered more than made up for any shortcomings (oh dear).