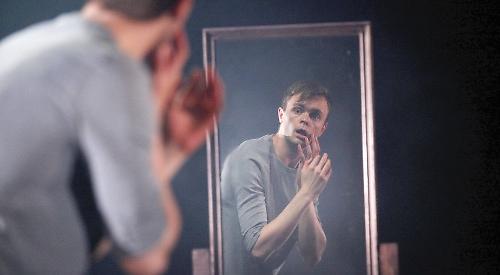 STORIES abound about artificial intelligence and androids ruling the world, but over the Halloween period the Watermill at Bagnor returned to Mary Shelley’s original in a reworking of Frankenstein by Tristan Bernays.

This production unusually approaches the concept more from the creature’s point of view than that of its creator, and George Fletcher acquits himself admirably in this very demanding part.

However, he was rather hampered in his quest by the opening scene — an over-long mime representative more of a very arthritic old lady getting out of bed in the morning than of life entering into an assembled cadaver.

But as the action unfolded the scene where the creature acquired its first words showed where the writer was coming from and engaged our sympathy with its child-like self.

However, that sympathy was difficult to maintain when the creature’s rejection by its maker and lack of human love reduced it to a murderous monster.

While not reflecting any inadequacy in the performances (Lucy Keirl supported as The Chorus), this is a slightly patchy production that has flashes of real brilliance and troughs of rather irritating repetitious action.

It could be felt that the adapter has concentrated too much of the plot towards the end of the play and the groundwork building the characters has slightly missed its target, resulting in a slightly unnatural acceleration of action in the latter stages.

This production has many good points, but would perhaps be rather more suitable to a drama school than to one of our leading regional theatres.