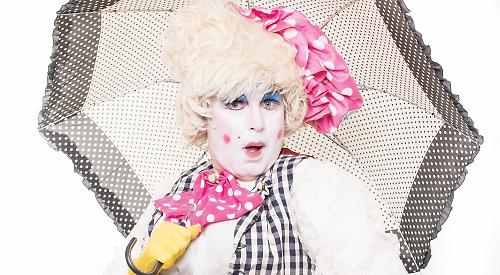 IT takes time and an awful lot of effort to get a pantomime to the stage where everything looks like perfectly organised chaos.

The story, the songs, the one-liners, the moments where audience and actors are as one — the “Oh yes he is!” and “Behind you!” moments.

No one knows this better than Ian McFarlane, who both writes and directs this year’s Kenton pantomime, Sleeping Beauty.

He is currently midway through writing the script, which is due in the hands of the six-strong ensemble of actors at the end the week.

“I promised them they would have it two weeks before rehearsals start and they shall,” says Ian during a break from his keyboard.

This is his second year at Henley following on from last year’s hugely successful Jack and the Beanstalk.

It also marks the fifth year of the traditional Christmas show that has now become a diary fixture for families in the area.

“I love doing it, but really you are compressing six months into around two months — but it is very exciting and very rewarding,” he says.

“I have gone down the traditional story route as I believe that is what children want. I have researched all the versions of the story and have stayed as true to the original as I can. If you look at the Disney film which has been so popular, parts of that were taken from the ballet.

“The version by the Brothers Grimm has a very dark and different ending and I haven’t gone down that route.

“The show is an organic mass that evolves from writing the script, to choosing the music, to the rehearsals and finally the production. Even then it can be changed in little ways to make it better.

“I have researched the music endlessly and I try fit the songs in so that they are part of the story. It’s all very intense for the ensemble, who have to be complete all-rounders, but we are very lucky with our actors — three were in it last year and we have three newcomers.”

One of those returning is Matt Ian Kelly as the dame. “I won’t be changing his role very much,” he says. “I think people want to see the dame as a familiar role. It will be the same dame with a different name.” The full cast is Annabel York as Fairy Light and Fairy Midnight; Hannah Pritchard as Princess Bea; Matt Ian Kelly as Nanny Trott; Thomas Ford as Prince Adolpho; Kieran Parrott as Prince Felix; and Jonathan Vickers as Jasper the Jester.

Annabel, Kieran and Jonathan are newcomers to the Henley panto, which is being produced by Oli Seadon for the second year running.

Oli and Ian first worked together on Jack and the Beanstalk before returning to the Kenton in September with The Three Musketeers starring Peter Duncan — a show they plan to take on tour next year.

Soundtracking both shows was musical director Alex Beetschen, who is back as the one-man orchestra for Sleeping Beauty — this time with the able assistance of a drummer. “He is brilliant as he showed last year and is key to the ensemble” says Ian. “With six actors there is no hiding place — you are not one of 20 in a chorus so you have to be good.”

Rehearsals start with a week in London followed by a week at the Kenton.

“I think it’s important to work in the space you are using and it’s a wonderful theatre,” says Ian. “Oli and I love the town and can’t wait to get started. We have some great sets — all rather medieval to go with the story — and some fabulous costumes.”

With not a soap star or fading Hollywood actor in sight, Ian and his talented team are all set to make the Kenton’s fifth professional Christmas panto part of the town’s festive fun.

There will be gags about Henley and experience has shown Ian that pantomime audiences differ from area to area.

“Henley is different to Hull, which is different to Richmond — although the children want the same things, with a good story, something they can feel involved in, some good songs and the chance to join in. The adults tend to have different tastes.

“But I am happy to change the script as we go along. If I see something isn’t working I will change it. That’s all part of the excitement.”

l Sleeping Beauty is playing at the Kenton Theatre from Thursday, December 15, to Wednesday, December 28. For tickets and times, visit www.kentontheatre.co.uk or call (01491) 575698. The box office at the New Street venue is open to callers in person from 11am to 3pm on weekdays and from 10am to 1pm on Saturdays.