Fairytale magic in each and every step 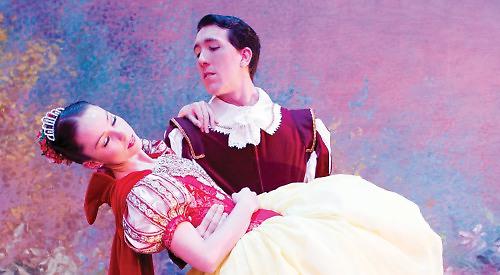 THE Theatre Royal saw the welcome return of the Vienna Festival Ballet with their production of Snow White, featuring a bold ensemble, with plenty of grace and fortitude.

With music by Faris and Gounod, rearranged by Alan Lisk and with choreography by Barry McGrath, the dancers swept through a spectrum of emotions as they relayed the familiar tale of jealousy, betrayal and ultimately serenity and happiness.

The entrancing movements and choreography — from the jaunty hip hop sections with the dwarves to the evil queen poisoning the apple and the dalliance between Snow White and the huntsman — were all enhanced by attention to detail and dedication.

Alongside the seamless dance pieces, every limb was held elegantly and poised beautifully throughout.

Once more, this talented troupe was bolstered by wonderful costumes and a sympathetic background set, with finely tuned melodies and lighting to suit the mood.

The black cloak, bold red and harsh white light enhanced the queen’s staccato plotting, while the jovial camaraderie of the optimistic dwarves shone through in their playtime, with jolly hats and brightly coloured furnishings.

Rachael Victoria Hernon as Snow White and Dean Rushton as the huntsman portrayed their blossoming romance beautifully, while Jodie McKnight was devilish as the queen.

The old story of vanity, wistfulness and attempted revenge was told with well-placed magic mirrors and cauldron props to complement the ballet steps.

Where the ladies of the group were dainty and delicate while also showing great stamina, the men had strength in their jumps, leaps and supporting moves— all the troupe demonstrating finesse and a love of movement and artistic expression.

It was clear that this show was enjoyed by all, as demonstrated by the rapturous applause.