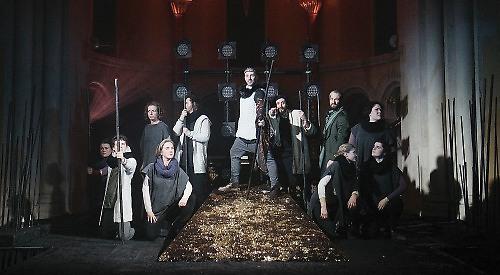 THE attention of the world was gripped when the bones of King Richard III were discovered under a car park in Leicester.

It is less widely recognised that it is believed the bones of Henry I were buried at Reading Abbey, and it is in St James’s Church on the site that a production of Henry I of England written by Beth Flintoff is currently taking place, staged by the top professional company Reading Between the Lines.

The atmospheric setting of the church grabs your attention from the moment you enter the building, with superb lighting emphasising a faint mist and evocative medieval music setting the scene perfectly.

And when the actors enter you are instantly transported back to a turbulent and brutal time when survival depended upon either fighting — or passive acceptance of your lot.

William the Conqueror is choosing his successor, and his youngest son, Henry (Toby W Davies), gets nothing.

We travel with him in Normandy and England as he struggles to change this and obtain power, and witness his battles with his brothers, the French, and his own conscience.

Although Henry is clearly the principal protagonist, the role of women in the early 12th century is cleverly explored through Henry’s sister Adela (Saskia Portway), who supported him through his power struggles, and Edith his first wife, (Emma Denly), who reigned in Henry’s place when he was away in France.

The play ends with Henry announcing his successor — his widowed daughter the Empress Matilda, who would succeed him as queen of England after his death.

This is a powerful and extremely impressive production. Hal Chambers’ direction is absolutely superb, as is the sound by Joe Morris and lighting by Oliver Welsh.

It would be impossible and unfair to single out specific performances, as each cast member is an accomplished professional and many double up to create two or three different characters, each superbly portrayed.

But it has to be said that the direction throughout is faultless and imaginative and the fight scenes particularly (choreographed by Dani Davies and Mark Middleton) are tense and perfectly played out.

There are many memorable scenes, outstanding among which are the wonderful shipwreck so dramatically portrayed through its direction and lighting, and a precise and lively portrayal of the hunting scene in which William Rufus is killed.

You don’t necessarily have to know your history to enjoy this spectacular show. There are full historian’s notes in the programme anyway, but the story of Henry I and how he came to build Reading Abbey is so excellently told that you are assured an enjoyable evening that will leave you full of admiration at the accomplishment of this talented company. See it if you can.

Until Saturday. For tickets and show times, visit www. readingbetweenthelines.co.uk