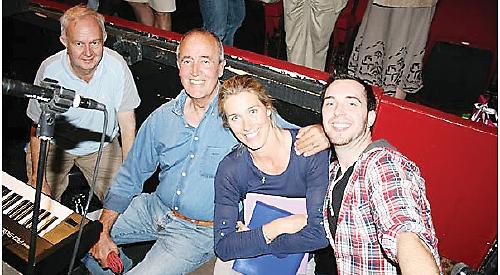 MOST towns would be happy to have one Christmas pantomime, but Henley is fortunate enough to have two.

Each year the Kenton Theatre in New Street stages a professionally produced traditional family panto — the proceeds from which make a significant contribution to the venue’s annual running costs.

As reported last week, this year’s Kenton pantomime is Sleeping Beauty, which runs from Thursday, December 15, to Wednesday, December 28.

It will be followed two days later by another long-standing theatrical tradition — the Henley Children’s Theatre group’s panto.

Rapunzel — A Tangled Tale is directed by Muffin Hurst, who has been overseeing the group’s shows for the past 30 years. It will run from Friday, December 30, to Saturday, January 7. This year, however, there is something of a twist...

Muffin, as many Henley residents will know, is the daughter of the veteran record producer and former Springfields star Mike Hurst.

A man of many talents, he has for years been writing the group’s pantomimes — which Muffin in her capacity as script editor would then “tailor” for the children taking part in the group’s Saturday classes at the Sacred Heart Parish Hall in Walton Avenue.

But this year, in a break from tradition, Muffin decided to write the show herself.

She said: “I’ve written this one from scratch and I’m nervous and apprehensive but also very excited. I like what I’ve done so far and, fingers crossed, everyone else will.

“We’ve got eight pantomimes that rotate every eight years and what we have to do at the Kenton is check what Reading, High Wycombe and Oxford are doing so we don’t duplicate their shows.”

Last year, as it turned out, there was a clash with what the group had planned, so Muffin decided the best solution was to add a new pantomime to the roster.

“I asked my father could he rewrite Beauty and the Beast because I love the story and it was coming out as a major film [now due to be released by Disney in March 2017], so it all seemed very current.

“So he sat there and he quite enjoyed doing it and he wrote a new Beauty and the Beast script — but I edited it quite a lot because I like to gauge it towards the children taking part in the show.

“And so I ended up having quite a big input into the script, saying to Dad that this needs to happen and then we want that to happen — and he did everything I asked him to do, he was absolutely fantastic.

“But when it came round to this year’s panto a similar thing happened, in that I couldn’t do the next one in the sequence because one of the other places was doing it.

“So then I struck upon the idea of doing Sleeping Beauty. And you won’t believe it, that’s what the Kenton were doing!”

Inspiration for Rapunzel came when someone said how much they had enjoyed seeing the Disney film Tangled, which came out in 2010.

“They called it Tangled because a lot of children don’t recognise Rapunzel as a story these days, but if you have ‘Tangled’ in the title they recognise it. So with Rapunzel — A Tangled Tale, I thought, oh, that will be fun and the children will recognise it and it’s got some good characters. I tend to hark back to the original story rather than the Disney version.”

Born in 1966, Muffin has been involved in the theatre group for most of her life, having started attending classes as a young girl. Back then, the group was called Henley Children’s Theatre Group and was run by Muffin’s grandmother, Flavia Pickworth.

She had founded it in 1969 after moving from London to Henley to be nearer to Mike and his wife Marjorie, who had moved to the town with their family following Mike’s rise to pop stardom in the early Sixties.

As Mike notes in a biographical essay on the group’s website, his mother’s own theatrical career began as a pupil at the Italia Conti stage school in the Thirties.

Her mother in turn had run her own dancing school in London, which Flavia was later to take over.

On moving to Henley she made her home in Hamilton Avenue and set up the theatre group — where her first three pupils were Muffin, her brother Tim and sister Alexis.

Said Mike: “She always wrote the scripts herself, giving as many children as possible a chance to shine individually. Her criterion was simple — if you had the enthusiasm and the nerve, you deserved a chance.”

For her part, Muffin is proud to be carrying on the family tradition, having been involved in running the group since her grandmother’s death from cancer in 1981.

“I think I was 14 about to turn 15 — it was a summer show,” she recalls. “It was all terribly dramatic because she died the day before the show was due to open and, you know, everyone was like, ‘What are we going to do? She’s died.’ And I sort of went, ‘Well, think I know everything that we’re supposed to do,’ because I’d been her assistant producer — I’d been really proud. And my dad said, ‘Well, do you think you can do it?’ And I went, ‘Yeah, I think I can.’

“So we went to the theatre and we carried on and obviously I needed a bit of adult support, with my father being there, and I think I was slightly precocious. Nobody really wants a
14-year-old telling them what to do, do they? Although I probably tried!”

Fast-forward 35 years and Muffin is clearly relishing her new role as a scriptwriter.

“Having done a lot of editing and suggestions last year with Beauty and the Beast, I felt buoyed by that and I thought I’d give Rapunzel a go on my own,” she says.

With a total of 120 children on the group’s books, the production will be split into two parallel casts of 60 — quite the logistical challenge, but one that Muffin is well used to from previous years.

“My dad writes amazingly and we’ll have missed him and his pen on this occasion, but I really hope that I’ve been up to the challenge. We’ve been having a giggle so far, so hopefully it will be all right!”

Tickets for Rapunzel — A Tangled Tale are £13.50 with concessions available. To book, call the Kenton Theatre box office on (01491) 575608 or visit www.kentontheatre.co.uk