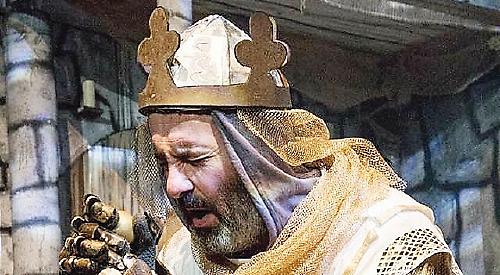 TOTALLY daft but totally brilliant! And this was just the dress rehearsal.

The Henley Amateur Operatic and Dramatic Society have delivered an extraordinarily polished and energetic show with exceptional performances and a laugh at every turn.

Even the announcements before the show are funny. No detail has been missed.

If you are a Monty Python fan you will love it. If you aren’t, what’s wrong with you? But you will still love it.

There was absolutely no weak link in this cast — they were all confident and obviously loving what they were doing.

As in the film, the main actors took various parts throughout the show and showed notable diversity.

Special mention must go to Tim Harling, whose comic French accent was genius, tap dancing spot on and walking in stilts impressive!

It was a family affair with Austin Marshall, who was made for the part of King Arthur and had a fantastic presence throughout.

His wife Sian showed striking vocals as the Lady of the Lake, and with that pedigree their son Tom was always going to be a star.

Tim Balmford’s performance as Arthur’s sidekick Patsy was just divine — so endearing and likeable throughout. If I ever need a horse sound effect (not unlikely!), I know where to come.

Joshua Young wasn’t the strongest of dancers but certainly more than made up for it with his comic timing and facial expressions.

James Gwynne was certainly dashing as Sir Galahad with his long blond locks — and although his higher vocals felt slightly strained at times, he gave a strong performance throughout, with expert comic timing. Sir Robin’s You Won’t Succeed on Broadway — or in this case Henley — performed by Ioan Havard, was a favourite moment, with clever lyrics, current references and clever caricatures provided by the supporting cast.

Lloyd White has a reputation for putting on great shows and this one can certainly be added to his list to be proud of.

Emma-Jane Taylor, arguably the busiest woman in Henley, choreographed strong and clever routines, and her team of dancers did not disappoint. (With her StageWorks performing arts school doing Peter Pan next week, I really don’t know how she fits it all in!)

The cast were on point with songs and harmonies courtesy of musical director, Mark Webb.

I did, however, feel the band and cast would have benefited from stronger leadership from the pit, with some clearer conducting and more guidance at times.

And some of the sound levels needed looking at, with the band drowning out some of the vocalists in parts. Hopefully this was ironed out before Thursday’s opening night.

It always makes me smile to think that such talent is hidden away in sales jobs, energy companies and schools locally. This was definitely amateur dramatics at its very best.