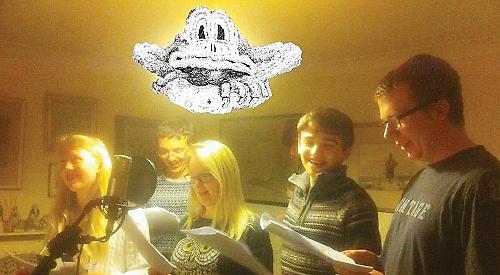 A PRODUCTION company specialising in “the magic of light and sound” has teamed up with Henley author Steve Allender to present a free show based around two cautionary tales.

Billed as the “stuff of dreams”, Jeux D’Esprit’s Something Old Something New is playing at the King’s Arms Barn in King’s Road, Henley, from Friday, November 25, to Sunday, November 27.

It takes two folk takes — one an established classic, the other a new work by Mr Allender — and brings them to life using the voices of Guillaume Gougeon, Sabrina Fawcett, Harry Petrie, Emma Dodd, Jason Fox and Brittannie Willis together with an impressive array of lighting and sound effects.

The “something old” story, Blue Beard, was written by Charles Perrault, credited as one of the inventors of the fairy tale genre, in 1697, and later illustrated by Edmund Dulac in 1910

A classic horror story, it was intended as a cautionary note to young women who became too curious.

What happened to Blue Beard’s previous wives? And why does he give his new betrothed the keys to the forbidden chamber? There will be blood...

The “something new” story, The Last Prince, has been both written and illustrated by Mr Allender.

A girl has a dream but just how far will she go to keep it alive? Yes, there will be frogs and princes, but not necessarily in that order.

Mr Allender, who volunteers at the Kenton Theatre, where he paints sets for productions, is well known to Henley Standard readers, having last year drawn the cover of the paper’s Henley Royal Regatta supplement.

A spokesman for Jeux D’Esprit said: “The special atmosphere of the King’s Arms Barn is the perfect setting for this stuff of dreams. Do come along but please book first as seating is limited. Entry is free but donations to the Chiltern Centre for disabled children would be most welcome.”

The King’s Arms Barn is located in the corner of Waitrose car park. The venue’s postcode is RG9 2DG.

The show is being supported by Henley Town Council.