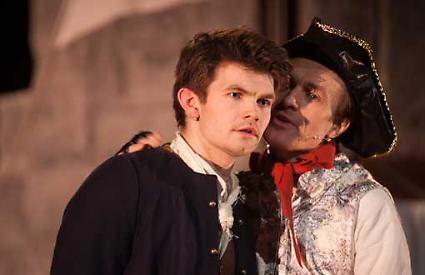 THIS adaptation of the famous Robert Louis Stevenson novel is an adventure that carries us across the turbulent seas and misty glens and highlands of Scotland.

With one of the smallest sets I have seen in a while, and the adaptation for each scene is wonderful  a room is turned into a house, then into a castle with a tower in front of your eyes. The five cast members do all of this themselves, very seamlessly as part of the show. They all play a few different characters, and you must concentrate to keep up but once you realise how it works it comes together well.

This is a very serious play. You learn of the ongoing battle between the main clans of Scotland at the time. The protagonist David Balfour is sold by his uncle to pirates, washed up on a beach and hides away with a wanted man. His adventures come to a finale when he learns of his natural birth rights.

The play says suitable for children aged from six, but in hindsight I would say that was a bit ambitious. It was certainly more appealing to the 10-year-old that I took than the seven-year-old.