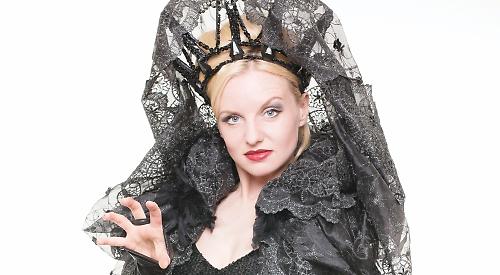 TO say that Annabel York is multitalented is no exaggeration — as Henley will discover when she takes to the stage in the Kenton Theatre’s Sleeping Beauty pantomime.

Since leaving her native
Doncaster to attend the famed
Italia Conti Academy of Theatre Arts, her life on stage — and
in film and television — has
been on an upward curve.

This summer she worked in an open-air production of A Midsummer Night’s Dream — including playing Lewes Castle — then picked up some gigs with her Twenties female singing trio, the Wild Tonics.

Next Monday she heads into rehearsal for Sleeping Beauty in which she will be playing — wait for it — four parts.

First up is Fairy Light and her alter ego Fairy Midnight then, Doncaster accent cast aside, she is Milady Greensleeves and also pops up as a Troll. So this is where it helps to be multitalented with accents and singing and dancing.

She is a newcomer to the Kenton panto company — one of three — but has done pantomime twice before in her native Doncaster in Dick Whittington and a previous Sleeping Beauty.

“I really am very excited about it, as well as a bit nervous,” says Annabel. “I have never been to Henley before but I’m told it’s a lovely town — a great place to spend Christmas.”

Rehearsals start on Monday (November 28) in London before the cast and crew move down to Henley.

“I haven’t really met any of the other actors apart from briefly at a session for photographs. But that is part of the fun of it — we will all need to work together and get on. Working well together is so much part of panto, I can’t wait.”

Two days after the show finishes Annabel will head off to Dubai for a singing stint — another of the benefits of being multitalented.

A fellow newcomer to the cast is Kieran Parrott, who is in his first panto playing Prince Felix.

An East Londoner, he studied drama at Liverpool and admits to a mixture of excitement and trepidation over his pantomime “baptism of fire” — especially as he’s playing the male lead.

“I can’t wait for it to start,” he says. “When we auditioned, Oli and Ian [the producer and writer-director] both stressed they wanted actors who could also sing and dance rather than the other way around. I think that’s the right way to do it — the audience have to believe in the characters they’re watching.

“And I think that a traditional show with actors is good. You see so many ads for people to be in panto who have ‘celebrity status’ and that shouldn’t be what it’s about.”

Kieran was brought up with annual visits to the panto in Ilford, but this year a family group has already booked tickets to come to see him star at the Kenton on Boxing Day.

“It should be great — especially as it’s my mother Della’s birthday. It will make it something really special,” he says, adding that he is secretly hoping he will be allowed to work in a reference to his mother’s special day. “I am looking forward to working in panto — it allows for improvisation and changing things as you go along to make the show better,” adds Kieran, whose carpenter father is part of an AC/DC tribute band.

“That is really our only family connection with showbusiness, but they are all looking forward to coming to Henley. I have stayed in the town and spent time walking by the river. It really is stunning and I am looking forward to spending time there.”

For both the newcomers, part of the appeal of Sleeping Beauty at the Kenton is the chance to work with an audience of children in a properly old-fashioned theatre.

But for the rest of this week their time is being spent reading and learning writer-director Ian McFarlane’s script. “I don’t even know how it ends yet,” says Kieran. “I can’t wait to find out!”

l Sleeping Beauty is playing at the Kenton Theatre from December 15 to 28. For tickets and times, visit www.kentontheatre.co.uk or call (01491) 575698. The box office at the New Street venue is open to callers in person from 11am to 3pm on weekdays and from 10am to 1pm on Saturdays.