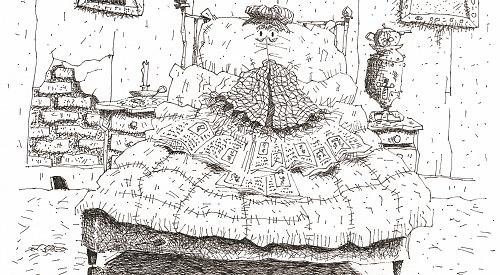 AN invitation to step into a magic lantern in the back of one of the oldest buildings in Henley and to suspend one’s disbelief for a brief span of wonderment is a rare treat indeed.

Jeux D’Esprit is a production team that combines light and pictures, sound and script to create glimpses of enchantment.

Their latest venture, Something Old Something New, is an interpretation of Charles Perrault’s 18th century classic tale of Bluebeard and Steve Allender’s contemporary story The Last Prince.

Assisted by Angela Pengilley who advised on the music, which included work by Bela Bartok, and Steve Allender, who provided the illustrations to his story, the cast included five local young actors.

To give you an idea: it is only a fine silk gauze framed in those ancient timbers and wattle that separates us, the audience, from the mechanics of the projectionist and the real world, but that is enough.

Floating on to the gauze of light, Bluebeard images by Edmund Dulac, one of the best illustrators of the Golden Age, and interiors of Moorish palaces appear and the gently persuasive voice of the narrator, Harry Petrie, and the childish intonations of Fatima (Emma Dodd) and her sister Anne (Brittanie Willis) coax us into a kind of sweet reverie of simple charm and happy nostalgia. How pretty those pictures are, what lovely dresses, and aren’t the interiors just fabulous, and who worries if his beard is blue — “It can be rainbow-coloured for all I care.”

The most ghastly apparitions cross our minds — they’re not going to show us what’s behind the door are they? A fully-grown audience member jumps at the sound of Bluebeard (Jason Fox) bellowing “Give me the key!” and suddenly we recall that fairy tales are actually terrifying and, putting childish things aside, we start to analyse just why they can still get to us.

We’ve been tricked. I don’t expect to think of Aleppo or the girls abducted by Boko Haram, but I do.

And in the second story, The Last Prince, subversive, disturbing, the masses of child carers and child slaves become embodied in the character of Tatiana, who, like many children, is told she is a princess.

Steve Allender’s illustrations — grimy, febrile and despairing and mostly black lines with the occasional splatter of a primary colour — are in polar contrast to Dulac’s.

As a whole, this brief immersion into a story through “son et lumière” is just as it says it is: a game, a play, un jeu d’esprit, and it works on many levels.

Under Richardson’s direction, it is deceptively simple. It is the trick of the light — both as in luminosity and in weight — for in that moment it is the spot of blood on the smallest key and the little kiss of a frog that unleashes a torrent of unexpected horrors.

And true to the genre where Tiny Tom can topple a giant and a thimble can drain a lake, Something Old, Something New is a small production with powerful insights.

The showings in Henley raised £630 for the Chiltern Centre for disabled children. We look forward to the next enlightenment.