This swell party deserves every full house it gets 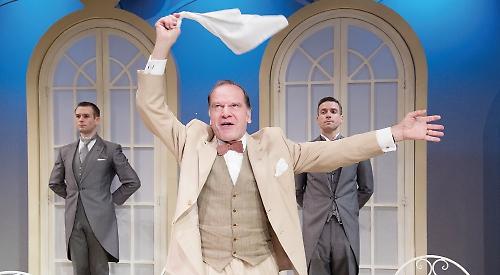 HIGH SOCIETY is high on everything — performance levels, energy, movement, pace, and life. It’s as close to fabulous and you’re likely to get.

The Mill at Sonning is a small theatre but everything about this Cole Porter classic is big — from the casting to the musicianship. What a swell party this is!

If someone can stir themselves to get out of London to see it then it should get some award because it deserves it.

We know from the opening bars and the precision dance and movement routine that we’re in for something special, and the performance never drops below excellent.

Musical director Charlie Ingles leads a tight four-man band through some of the greatest show songs ever written: Who Wants to Be a Millionaire, I Love Paris, True Love, Just One of Those Things, Well, Did You Evah! and High Society itself are just some of the musical treasure chest. Ingles also gets some top vocal work from every one of the 11-strong cast but especially the leads, Andrew Alexander and Bethan Nash, and principals Sandy Batchelor, Kirsty Ingram and Gemma Maclean.

Director Joseph Pitcher has choreographed the small stage to make use of every part of it without ever being crowded and Kirsty Ingram especially is able to show off her ballet skills with freedom.

Mill at Sonning sets are often just a back wall with doors, windows and cupboards. This time the wall is made three dimensional by turning it into a passageway, giving more movement options.

High Society is a sophisticated and daring musical from 1938, when its amorality would have been seen in a different light to now.

It’s a love story but it’s also about the American elite’s disregard for conventional relationships and boundaries. For American elite, read elites anywhere.

We join the Lord family in their rich Long Island home on the eve of a wedding. We learn that this is not the bride’s first marriage and a previous husband turns up to throw his spanner into the works. So too do two investigative journalists from the other side of the tracks.

Cue inverted snobbery, surrender of principle, lots of drinking whereby everyone is levelled, the hint of sex and a joyful denouement.

The Mill’s managing director, Sally Hughes, has done some inspired programming with High Society which ought to bring full houses over the Christmas period — frankly, if you care about the theatre you’d be silly to miss it.