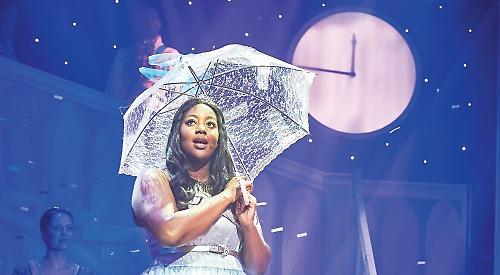 CINDERELLA as a funky RnB strutter, Buttons as a mouse, Dandini as a cat? That’s progress for you.

Actually, it’s fine — time moves on and why must Buttons always be a basement-based lackey, or Cinders a sickly sweet innocent, or Dandini a preening aristo-halfwit companion to Prince Charming?

Steve Marmion’s Cinderella at the Oxford Playhouse brings Cinders right up to date in a fast-moving, energetic and committed production.

The story remains but the characters are very different and they don’t suffer for it.

Even the Fairy Godmother gets the treatment and becomes a mouthy East End market trader — or very like one. What marks this out is the committed performances and lively pace: the songs come at you like a gale, the dance routines constantly shift and reveal, the stepsisters’ gags are delivered with machine-gun speed.

The singing, especially from Rochelle Rose’s Cinderella, is right on the nail with powerful solo work backed by spot-on harmonies.

Cinders is no retiring little creature bemoaning her lot, she’s feisty and up for it but needs a little help.

Buttons is a mouse! What? Yes, a mouse; but Matt Ralph is so appealing in this role and identifies with the kids so well that he turns it into a triumph.

Lucy McCormick’s Dandini is played slinkily as a cat and a new tension develops between her and Buttons.

And Prince Charming isn’t quite the romantic hero, more of a Prince Harry character — up for a party and a good time, but with a good heart... (Am I okay with that? I don’t want to spend Christmas in the Tower!)

This Oxford Playhouse Cinderella is a high energy panto with great movement, costumes and a versatile set that enables the action to keep firing without dropping a second.