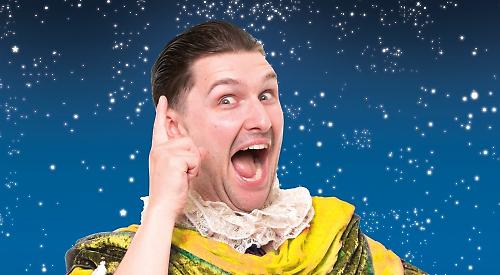 FOR Jonathan Vickers his birthday on Sunday, December 18, this year will really be a day to remember.

In his role as Jasper the Jester he will be doing three shows in the Kenton Theatre’s panto, Sleeping Beauty.

“It will certainly be a different way to celebrate the birthday,” says the Aberdeen-born actor, who is currently busy in rehearsal at the theatre.

Jonny, as his friends know him, is no stranger to Henley thanks to his girlfriend Lucy Hewes. She started working in the town with Rock Choir at the town’s Valley Road Primary School. When they were looking for someone to help with teaching drama, in stepped Jonny.

It is something that gives him great fun and satisfaction — and no doubt many of his pupils will be getting the chance to see just how good their teacher is on stage.

Comedy is a key part of Johnny’s working life. He enjoys doing it and playing Jasper the Jester in Sleeping Beauty will give him the chance to show off his full range of talent.

“Along with the Dame I am involved in all the gags, both verbal and visual,” he says.

“I have done panto once before in Lincoln but actually appearing at the Kenton where I know the town so well is great.

“It is also rather unusual to do it this way round. I went to the pantomime last year and also went to the The Three Musketeers [which was produced by the same team]. So it will be different to be on the stage. It’s a lovely theatre and we are all enjoying rehearsing in it after a week of rehearsals in London.”

As it happens, Jonny knows Sleeping Beauty writer-director Ian McFarlane well. “I have worked with him four or five times before — in fact, he gave my first professional job back in 2009. He is great to work with — I understand him well and as he is writer and director it is very easy to deal with the script and the performance as it is just one person involved. The writer doesn’t have to refer to the director and vice versa, which makes it easier.”

Jonny is playing other parts as well as Jasper the Jester, but multi-tasking is nothing new for him — in Jeff Wayne’s War of the Worlds he understudied every other male role as well as playing four parts of his own. “It is a very good test of the memory where lines are concerned,” he says.

Jonny has an unfulfilled wish to do stand-up but is making a big name for himself on social media. He has been nominated for this year’s Rising Star of YouTube awards. Under the title “I Read Books In Nightclubs”, Jonny has done a remarkable 110 comedy videos.

“It is brilliant practice both for appearing in front of a camera, writing and editing. I love doing it and it does seem to get me recognised,” he says.

“A girl passed me in the street and said ‘Hello Jonny’ and I racked my brains to remember who she was until I realised she had watched my videos.”

Lucy has been known to take part in the videos and will be coming to the panto. “Actually, she is coming on two successive days, so she will know all the gags by then!”

If you want a taste of Jonny on video before you go and see Jonathan on stage, then head for the I Read Books in Nightclubs channel on YouTube and click on the video “Everything Wrong With Christmas”.

l Sleeping Beauty is playing at the Kenton Theatre from December 15 to 28. For tickets and times, visit www.kentontheatre.co.uk or call (01491) 575698. The box office at the New Street venue is open to callers in person from 11am to 3pm on weekdays and from 10am to 1pm on Saturdays.